If you dig your EDM tossed and turned inside out, as well as upside down, then you will immediately get turned on by titles like Radio Edit, Global Radio...

If you dig your EDM tossed and turned inside out, as well as upside down, then you will immediately get turned on by titles like Radio Edit, Global Radio Edit, Sub Crusher, Club Mix, Dub Mix and Global Club Mix – all which suggest that the track, “Champion” by Groove State has been bounced right across the rhythm and sound spectrum for your pleasure.

In between these mixes, we actually get glimpses of some quality material and it’s hard to detail just how many gallons of creative fluids are flowing here. What we do know is that the one half of Groove State – music producer Deep G – has tweaked and tuned these mixes to perfect crossover dance-pop anthems, while his sidekick –  Lisjana on vocals – has spread her alluring honeycomb vocals all over these beats. 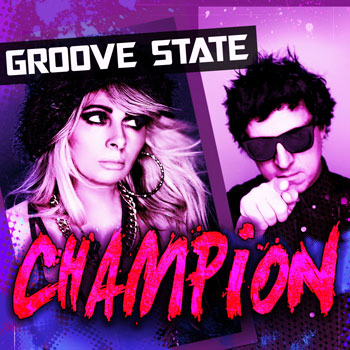 The fun here is manufactured beyond belief, sometimes even far better, depending on which mix catches your fancy. Deep G delves into an interesting fusion of psychedelic textures, dark synth melodies, hulking basslines and inspired beats.

At its best moments, the production of this six song EP feels focused and all the elements taken into the mixes fit very well and come together. The finest moments on this EP aren’t when the synths scream melodies in your face like most EDM out there today, but when the melody creeps up on you and creates electrifying cathartic atmospheres.

“Champion”  has some really brilliant remixes that exhibit real flair and combines the dirty grind of the ghetto with modern pop and dance to create something exciting and really forward thinking.

“Champion” is a compact listen that will leave listeners with a clear, definable impression. These remixes are big patchwork quilts of influences that Groove State bring to the table, towering high enough to deserve the critical acclaim this duo has been accumulating since the release of “Champion”.

They have so many interlocking rhythms and sounds going on throughout the remixes that it would be incredibly easy to become distracting and dizzying – yet the EP as a whole feels smooth. Deep G knows how much is too much or too little, and his struck a balance between simple, repetitive, and a jungle of chopped and skewed distortion.

Lisjana’s vocals are given enough space in the duo’s immense sound, to make sense of a multitude of competing styles and rhythms. Groove State have blended in pop into their EDM without leaving behind the experimental factor that sets them apart, and the narrative holds its ground firmly!

THE STORY SO FAR: Groove State is two Australian songwriters/artists, Lisjana on vocals and music producer Deep G. Their independent dance hits have achieved Top 20 USA National Club Chart success (FMQB, DJ TIMES) and heavy rotation on dance radio airwaves and mix shows around the globe. Groove State’s music videos have received over a half a million views. In 2013 Groove State’s song “Do You Want My Love” placed in Shameless USA TV series on showtime and their song “Light Up The Sky” was used on the USA TV network ABC’s cult drama “The Lying Game” with an audience of over one and a half million. Tracks from their debut Album have also been licensed to Nokia, Red Bull, Sony Entertainment UK (Play Station), Abercrombie & Fitch, Footlocker, Wilson Advertising, Rock America, and Universal Records.

Decide: “Struggle Inside” – a showcase of genuinety, vulnerability, and diversity

The Silver Bayonets: “Low” hits like a ton of bricks!