Only a band totally confident in its own abilities could produce a song called “Political Freak Show” and not only get away with it but make it sound like...

Only a band totally confident in its own abilities could produce a song called “Political Freak Show” and not only get away with it but make it sound like an absolute classic. Roger Cole & Paul Barrere is that band and the song is a triumph of intelligent arranging that sparkles with fiendishly clever lyrics melded to a razor sharp art-rock tune.

Clever without being pretentious, Roger and Paul are two talented musicians and songwriters who have yet put a foot wrong – if you haven’t at least listened to one of their previous releases you’re missing out on some of the best honest, organic music coming from the independent scene. I find it hard to understand why Roger Cole & Paul Barrere don’t have a far greater profile; perhaps they are just too clever and sincere for the majority. 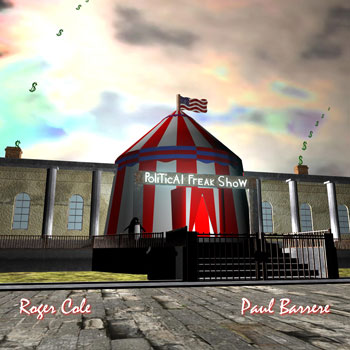 The duo has tackled a bewildering array of subjects, from serious to sublime, during the last 2 to 3 years – going from simple acoustic blues to a big fat rock sound. On “Political Freak Show” they dip their feet into modern political shenanigans. And what sounds like surprising upbeat simplicity, is really multilayered complexity…made too sound like ‘surprising upbeat simplicity’!

With their apprenticeships longtime served and all the roots and classic rock stuff already recorded, released and out of the way by now, on this track, the duo don’t just change up a gear – they upgrade their vehicle.

“Political Freak Show is a master class in the composition of popular progressive music classics, and reaffirms the composers’ status as major contributors to the independent rock genre. Starting right here, their work should weave itself through the popular music culture for quite a while…if there was any logic or artistic criteria applied.

The brilliance starts with the dynamism of the melody and the clever lyricism, and the quality stays high throughout. The gorgeous bass line is worth the listen alone, as is the frolicking piano. The track clearly shows why we are so constantly disappointed with everything in Pop and Rock these days.

Roger Cole & Paul Barrere are master musicians, vocalists, technicians, innovators and above all – songwriters. You will hear all of these things in this one song. To find anything as deceptively arty, progressive and eclectic as this, you’ll have to turn back the clock and scour the catalogs of the likes of 10cc, Steely Dan and Supertramp, or anybody else capable of making complex art-rock sound as simple as alt-pop!