Originally from Northern Germany but now based in Brighton, UK, Birte Paulsen says that she has been writing and performing for as long as she can remember, adding that... 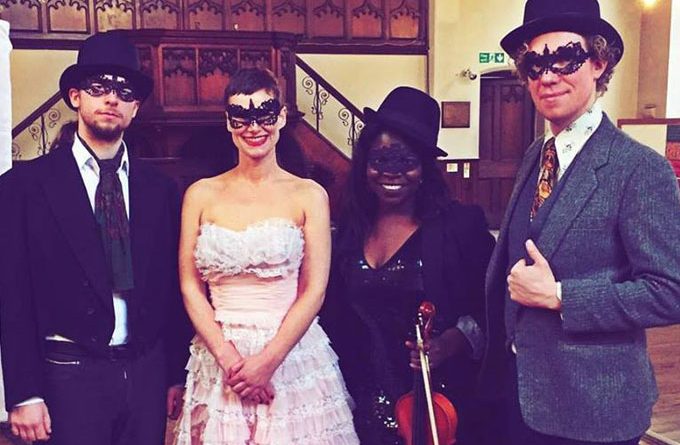 Originally from Northern Germany but now based in Brighton, UK, Birte Paulsen says that she has been writing and performing for as long as she can remember, adding that she finds “beauty in sadness.” Her album “Borrowed Time” started out as a 4 song EP but soon turned into a full-length album, “thanks to the hard work and enthusiasm of some incredible musicians I am very lucky to work with,” said Birte.

The album features Alfie Weedon on double bass, ukulele, harmonies and percussion, Mishkin Fitzgerald on piano and accordion, and Ben Weedon on violin. Simple acoustic instrumentation complement the strengths of the lyrics and the beautifully ethereal vocal delivery, Birte Paulsen and her band employ judicious use of passionate crescendo and artful silences.  The lyrics are thoughtful and often even deeper than they might at first appear, but the more you listen, the better appreciation you have for the gifts of this music.

The harmonies are sweet and thick and powerful as Birte blends alternative-folk with tales of love, loneliness and loss and all that life throws at you. She has a way of cutting topics down to the very heart of them and revealing something very true. And she’s got the sense to trust the power of the songs and her evocative voice to carry the message.

The album opener, “Fool”, has a crooning folk atmosphere with an electric guitar giving it a little edge. The title track “Borrowed Time” is an early album standout and is a great example of how accessible Birte Paulsen and the band can make traditional instruments sound. Soft and lilting, and dominated by picked stringed notes, it’s refreshingly genuine and heartfelt.

The album’s arrangements are impeccable throughout, while the playing remains elegantly energetic – never forced and never overdone – even on faster songs like “Used To Be Friends”. Clearly Birte’s melancholic intonations lends itself perfectly to the slower songs, so it comes as no surprise that the albums apex is reached by tracks such as “Berlin”, “Traces Of You”, “Black Thumb” and “The Only Thing”.

It also has to be said that the subtle vocal accompaniment supplied by Alfie Weedon is simply stunning. The harmonies created between Birte and Alfie are achingly beautiful enough to melt the hardest hearts of stone.

Birte Paulsen, to me, doesn’t write pretty music or clever lyrics as much as she conjures up a portal to somewhere romantically and beautifully tragic. Her voice is like a beam of light that casts rays of melancholy interspersed with hope that make you want to listen to her music again and again.

Birte is superb on all the levels that she needs to be. She is an absolutely first rate songwriter, and an exceptional vocalist, singing in an almost impossibly pure voice that can border on a whisper as much as it can shatter a glass. Birte Paulsen fills a musical niche to which few others can aspire, and she does so brilliantly!

Cody Webb – This is how country music evolves!