“Expedition Delta 2” is an evolution, and indeed a culmination of many of the ideas Srdjan Brankovic has been drawing on in his earlier works.

Guitarist, songwriter, producer Srdjan Brankovic has opened for bands such as, Whitesnake, Apocalyptica, Savatage, Paul Di Anno, Blaze Bayley and many others. He collaborates with many important Serbian bands, including Numenor, Despot, and Lunar Pocket. Moreover Srdjan is also a founder of AlogiA – the highest selling ProgMetal band in Serbia – and the Expedition Delta project. In the past, the Expedition Delta project has attracted a series of world class players to its recordings. On the new “Expedition Delta 2” album, Srdjan desired more of a band feel instead of just a project vibe, so he invited some old and new friends along for the ride, like Bobby Koeble (Symbolic-DEATH) and Nicola Di Giă (BANCO DEL MUTUO SOCCORSO). 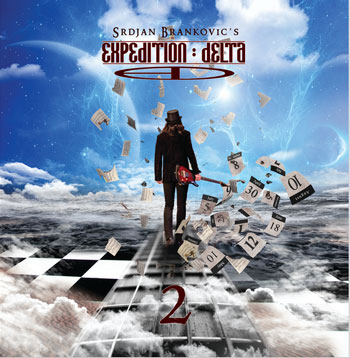 To be honest, “Expedition Delta 2” was an experiment for me. I love it when my expectations are surpassed. Every song on this disc is really awesome. There is a very strong progressive presence here. Unlike most classic metal, which tend to have the same drum beat in every song, Srdjan Brankovic’s Expedition Delta maintains the ever changing element of Prog. Singer Nikola Mijic is awesome. His range and power is phenomenal, and I consider him one of the better singers in the genre.

Srdjan Brankovic is a world class musician, not just a great guitarist. His solos are tasty, yet display a measure of melodic restraint. He has a clean, precise tone to his speedy runs and arpeggios. You’ll also find Srdjan on rhythm guitar and bass, besides taking up duties behind the production boards, as well as writing the music and lyrics. Timekeeper, Marko Milojevic, on drums, also makes a gigantic contribution to the album.

“Expedition Delta 2” is an evolution, and indeed a culmination of many of the ideas Srdjan Brankovic has been drawing on in his earlier works. The melodic passages are bolder, the crunchy guitars even crunchier, the bass lines even more thumping, the keyboards more sweeping, and the drumming harder hitting than ever. It is a collection of ideas, songs, melodies, lyrics and themes.  If you grew up in the eighties with bands like Rush, Iron Maiden, and Judas Priest, you’ll appreciate the melodic immediateness, yet layered tones and textures of “Spectacular” which kicks off the album.

“Break The Rules” does a great job of showcasing this band’s superb musical talents and excellent songwriting skills. The production is as sweet to the ear, as is the really catchy hooks with Nikola Mijic once again soaring on vocals. Perfectly crafted progressive metal, the song offers its own melodic blend with enough experimental content to be unique and at the same time maintaining great accessibility. Bobby Koelble lays down some stunning lead guitar on this track.

“Thank You For The Good Times” is a bittersweet romantic escapade without the cheese. Up-tempo, it features shimmering synth interludes in support of the crunchy guitars and sweetly layered harmonies. I am immensely impressed with the complexity of the song structure on the inspiring “Fly With Me” which seems to flow genuinely to compliment the amazing vocals that both Nikola Mijic and Andjela Isic powerfully display here.

This proves to be one of the standout tracks on the album as Srdjan Brankovic continues making a unique kind of rock music, breaking barriers and redefining boundaries.  The music is bolder, more progressive, more experimental, and yet all the instruments are as tight as it gets and the sound is pretty heavy. Milojevic’s drums are uber-impressive and Brankovic once again proves he’s one of the most proficient rock guitarists around.

The piano arrangement, “Canis Major” splits the album, offering a breather before “Without You” breaks the silence with the power vocals of Andjela Isic, offering a mainstream twist to the album. Srdjan Brankovic’s Expedition Delta always pushes its creativity into something new and they don’t disappoint here on “The One Who Lives a Dream”, as they bring you something familiar yet unique. Wrapped up in quietly underwhelming vocals and picked guitar strings.

“House Of God” is yet another album standout. The song is full of orchestral-like movements, extraordinary musicianship, a rich melody and powerful rock content. It paints a picture; it tells a story. The drumming here is sure to dazzle and impress. There’s plenty of double-kick work to keep metal-heads pumping their fists, but it’s all the grace and groove that Srdjan Brankovic brings which creates a subtle shift in the vibe of the music and takes it to new heavier places.

“I don’t believe” has a melodic vocal hook that will stick in your head like a classic 80s power rock song. Srdjan’s chops are dazzling as ever, as this one grows on you fast.  The epicness, the finesse, the virtuosity, the tenderness, and the melody are all squeezed into the formula of the ballad “Remember Me”. The complexity and the progressive elements return on the final bonus instrumental track, “Connected”. You’ll enjoy the music because of the emotions it elicits, not merely for its musical mathematical complexities or sonic consistency.

In a time when most bands have stopped trying, Srdjan Brankovic’s Expedition Delta continues to challenge themselves. Simply put, few bands have the same bombastic musical audacity. There are still a few great progressive metal bands around, but Expedition Delta strike an incredible balance of power, technique, emotion, and melody, with a unified vision possible only with the remarkable degree of chemistry these guys share here. And, in many ways, “Expedition Delta 2” is their best work.

BoyEatsGirl will crush the wind out of your lungs with its technical power!

Late Night Savior: “Among the Forgotten” manages the elusive blend of hard rock and melody!