Courtney Asunmaa who earned a Bachelor of Arts in Finance at Ashford University, is currently getting her Master’s Degree of Accountancy at Ashford University. In between, Courtney finds the time to writes opera librettos, plays, song lyrics, TV scripts, movie spec scripts, novels, and poems. Many of her writings are translated into spoken word songs and associated with a wide variety of musical soundscapes.

Courtney also writes songs that captivatingly sung by selected featured singers – from Sophia Omarji to Zaira Nubile, and Melissa Otero to Liz Turner, among others. A collection of her works can be found on the 15 track album, entitled “Words”. 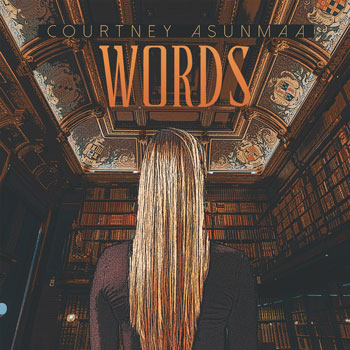 Courtney Asunmaa doesn’t sound like your typical emcee, and by virtually every definition of the genre, her music is in fact not hip-hop. “Words” flows through a varied palette of musical works that cover Pop, RnB, EDM and alternative electro, empathetically matching Courtney’s every nuanced tone, word for word, mood by mood.

Courtney weaves romantic lessons and experiences into her layered, deeply involved storytelling reminiscent of a live recital. Her wordplay and poetry is thick and complex, rivaling the greatest lyrical bits that rapping emcees give the world.

Courtney Asunmaa is her own woman here, and she proves she can flow to any beat, on her own terms. Anyone can relate to the universal feelings and sentiments in “Words”, and everyone can take something valuable from this unique, original, spoken word and beautifully sung musical project. I think the choice of adding melodically sung songs, in between her spoken word pieces was an extremely good one. Spoken word music, though profoundly mesmerizing, can often be daunting to the untrained ear.

Not having a melody, these songs require an even more attentive concentration on the listener’s behalf, which can become tiring song after song, no matter how brilliant the interpretations are. But when you are presented with smooth sonic silk like “Sweet Words (ft. Melissa Otero) or stimulating soul food such as “Endless Romance” ( ft. Liz Turner), you are more prone to continue consuming track after track, without once touching the stop or skip button.

And this magic-switching, between Courtney Asunmaa’s dramatic and melodramatic spoken word music, and the fully blown vocal creations continues, with the heart-stirring “The Jewel of My Heart” (ft. Sophia Omarji), and the upbeat and bubbly “She Knows How To Move” ( ft. Zaira Nubile).

Courtney herself is most impressive on, “Taken by My Dreams”, “Trapped in Her Love” and “An Endless Dream”. If you want to hear something totally new, with very meaningful insights, and great storylines to boot – it’s all here. Courtney Asunmaa’s songs give birth to poignant treats for your ears and mind, with each subsequent listen.