“Beyond Reason” propels Dany M back into recording life!

Dany M was born in Portugal and has been playing the guitar and writing songs since he was 15 years old. After playing bass and guitar in various bands,...

Dany M was born in Portugal and has been playing the guitar and writing songs since he was 15 years old. After playing bass and guitar in various bands, he stopped performing in 2013. In 2010, Dany M‚Äôs passion was re-stoked with the birth of his daughter, as he wanted her to look to him as the guy who never gave up on his dream. He returned to public performing, and after receiving a good response from his audiences, started work on his album in 2016. The result is the April 2017 release of the 10‚Äìtrack “Beyond Reason” album, which has influences of pop, rock and blues.

This is an album that seems to be a continuance in Dany M‚Äôs music and life timeline. Everything you would expect from grown up rock n‚Äô roll is here – the pithy, the reality, the tender, the introspection, the style, the musicality. ¬ÝThe whole album is really solid rock, mixed with some pop and blues flavors, plus a few mellow tunes thrown in to balance things out. 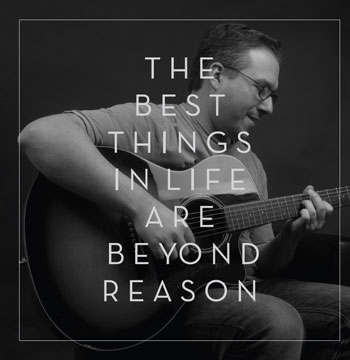 It‚Äôs hard to pinpoint the standout moment upon my first listen to¬Ý“Beyond Reason”. Each of the tracks on the record have a life of their own and bring something fresh and different to the table but if I had to choose it would have to be¬Ý‚ÄúKing Of The World‚Äù, the opening number and the first song on the record to propel the musician back into recording life. I mean what a straight-up rock n‚Äô roll track!

Sounding somewhere between Joe Walsh, Peter Frampton and Eric Clapton,¬Ý‚ÄúKing Of The World‚Äù is without doubt one of the standout tracks on the record and the perfect number to usher in his long awaited new material. The catchy chorus resonates perfectly around its hook-like guitar driven verses.

The subtle harmonies that sit within the chorus are also a complimenting rider within the track. Funky tones run thick on the other standout rocker, ‚ÄúSuperNova‚Äù. A bustling number that switches between soft and loud tones, it boasts some meaty guitar riffs and hooks that make you wonder why Dany M waited so long to get into the public eye.

With ‚ÄúI Need Your Love Tonight‚Äù¬Ýwe are given one of the albums key slow-tempo numbers with some incredibly heartfelt lyrics displaying the vulnerable side of a man rediscovering love. The track also contains smart little one-liners like ‚ÄúEverything lasts until it‚Äôs gone.‚Äù

The other ballad worth mentioning is of course the final track, ‚ÄúIt‚Äôs OK‚Äù. Though vocals are not really Dan M‚Äôs strongest point ‚Äì I think his songwriting is his most vital weapon – here however he is at his best vocally. When his voice maintains itself steadfastly in a conversational tone, similar to that used by David Gilmour on the occasion or more often by Mark Knopfler of Dire Straits, Dany M comes into his own.

There isn‚Äôt a dull moment found within any of the 10 tracks making up¬Ý“Beyond Reason” and that is a rare thing to come across these days. While most of today‚Äôs ‚Äòhere today, gone tomorrow‚Äô acts may find solace in churning out heartless records filled with recycled fodder,¬Ýthis one proves that time and dedication ¬Ýis also what makes or breaks a release.

Jerome Bell: ‚ÄúBurn Easy‚Äù – is a diamond in the rough