It’s incredible listening to Derby, UK based Jordan Bazza’s “Well I’m Lost” – how soothing, how melancholy, how generally atmospheric it is. Then a realization even more amazing occurs...

It’s incredible listening to Derby, UK based Jordan Bazza’s “Well I’m Lost” – how soothing, how melancholy, how generally atmospheric it is. Then a realization even more amazing occurs to you—this is only his debut album. Close your eyes, listen to this, and you’d imagine singing-songwriting maestro who has been polishing his music for many a year. Quite frankly, the world probably wasn’t, nor is it, ready for a work of the emotional scope of this, from a new acoustic music artist of Bazza’s mettle. There’s something so very natural about “Well I’m Lost”. It doesn’t sound contrived or forced, it’s understated when it needs to be (pay attention: this is an important quality), and it’s certainly mature. 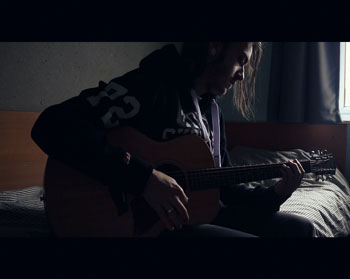 It’s dark and moody. It’s sad and questioning. It’s angry and honest. Why would anyone want an album like that? Because it’s fucking amazing, that’s why. It’s the battle we all fight with our demons in a perfect fusion of lyric and music. Each song on its own is beautiful and brilliant, but once you listen enough you will understand how perfect the album title fits the pieces contained therein. This is a flawless album.

You will forget you’re listening to Bazza’s first outing right from the very first track. The friction to loss opener “And Then She Left”, works—passionately—through a love lost mold, though it’s dynamic is far from as predictable a sound as you’d draw from that description. Jordan Bazza outlines it with soul-searching mutters and unrefined back-of-the-throat defiance.

Next on the album is “Cracks”. This song has some amazing lyrics, a common occurrence with Bazza. The song is about a man who has fallen from his former standing and finds himself alone, but is trying to find his way back to happiness. Lyrics like the lines, “…but am I truly able to accept all that I’ve done. To believe that I can do some good, to accept what I’ve become,” take you back to a time where you doubted yourself. Everyone has a moment like this (maybe more than one), and Jordan Bazza captures the feeling perfectly in this song.

“Still Quiet” plays like a spoken poem with a picked guitar and strings backing, before the drums and the vocal harmonies set in. The track has more in common with Pink Floydian space rock than the quasi-emo sounds you might have linked Bazza with. “I’m Lost” represents that Jordan Bazza knows what a good melody sounds like, although his ever unwilling to abandon his brilliantly introspective songwriting. By making sure the line is firmly drawn, Bazza leaves plenty of digestion for open-minded listeners. 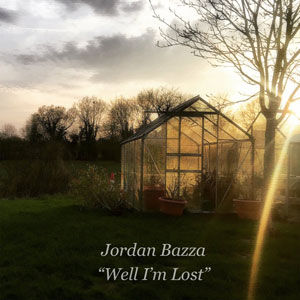 “Well I’m Lost” is a special record, one that is moving and advancing the acoustic genre. But I’m also convinced there’s more to it than pushing the boundary of stripped down alternative music. It’s a rare album: one that asks us to look into the most damaging part of our soul, and often comes up with just as many questions as answers. This debut album is a tumultuous ride through what are essentially the back-pages of a heartbroken and needy young man’s personal diary.

The music is subdued throughout; the interweaving acoustic guitars evoke an almost post-rock, ambient sound. Bazza’s delivery alternates between the beautifully sung and softly spoken words. “Save Me” and “So I Stay” is quite similar to the preceding tracks in structure, but the mood and sound has been shifted to more layered and lush soundscapes.

I fact the second half of the album definitely had my ears peeked to full attention, especially the instrumental interplay and strong-natured vocal arrangements on “You Had Me At Goodbye” and “Echoes”. The intensity found on “Well I’m Lost” isn’t ever induced by force or aggression; it is motored by passion and has a progressive, albeit somewhere between Richard Ashcroft and Radiohead-esque, nature to the music.

The album is full of incredible songs and genius heartfelt lyrics, and the man behind the voice is just as incredible. “Well I’m Lost” is best listened to during a long drive or an undisturbed sitting where you can focus on the lyrics and composition of the songs.