The band Ex-Okay was started in June 2009, by songwriter Tom who created the name after going to a local show. The original band members played shows in 2010...

The band Ex-Okay was started in June 2009, by songwriter Tom who created the name after going to a local show. The original band members played shows in 2010 but decided to go their separate ways. In 2011 Tom started recording at a studio. He recorded two songs: “Overseers Thirst for Revenge” and “If You Only Knew What I Know”. Tom wrote 10 more songs for the album and went back into the studio to record them in 2015. 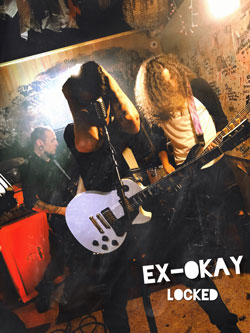 “In Regards” was released as a single and music video in the fall of 2015. The band members featured in the video are Tom on guitar, lead singer; Clint on rhythm guitar; Cameron on bass, and Brian on drums.

In early 2017 Ex-Okay went into N.R.G Studios to mix “Awkward Silence” the project’s brand new album, set to release soon, and as a calling card the band has dropped the lead single, “Locked”. If there’s anything that we learn from this track, it’s that Ex-Okay are at their best when they embrace their wildest impulses.

They take the alternative rock template and infuse it with nu-metal harshness and anthemic hard rock melody. Fundamentally, Ex-Okay growls and sings, and literally kicks ass on this single.

“Locked” is the sound of a rejuvenated band scything down the zeitgeist of alternative rock, with the song’s triumphantly booming introduction coming off as a deliberate attempt at catching unsuspecting listeners off-guard, as they roar headlong into the opening verse.

The second shock to the system, comes on the refrain, when the girl asks: “Tom, how are you going to get to my heart?” And the answer is thrown back without a blink of an eyelid: “Through your rib-cage!”

This is when all hell breaks loose, and Ex-Okay growls its way into the chorus as an earth-shattering drum groove, overdriven guitars and layered harmonies force the track into overdrive. A coarse combination of speed and power before disintegrating into a bristling, chewed-up fade-out that’s as sharp as it is raw.

Proving that they can create multiple slabs of widescreen hard rock that manages to push their boundaries while still maintaining the overall integrity of the band.

On listening to “Locked” it’s hard to deny that Ex-Okay has come out looking as one of the best of the most prominent underground nu metal/alt rock acts currently around. Their sound is far more layered than many other groups in the genre, and there’s interesting textures to be heard beyond the relentlessly thick guitar work throughout.

This new record, “Locked” is a sharp breath of hot, humid, smack-your-face rock music. It’s a commendably ambitious way to start things off for their upcoming album – “Awkward Silence”. It’s a statement. It is pure visceral energy and emotion packed into one song!