Chris Murphy: “I Swear I’m Going To Learn This Time” – as close to pure as modern-day music gets!

Chris Murphy constantly impresses with his genius imagination on the single “I Swear I’m Going To Learn This Time” (from the album Water Under The Bridge). His incorporation of...

Chris Murphy constantly impresses with his genius imagination on the single “I Swear I’m Going To Learn This Time” (from the album Water Under The Bridge). His incorporation of his influences into a synthesis that is both. Something old and something new. Jazzy guitars, Ragtime pianos, Folk-like vocal touches, that wonderful violin, and his heart on his sleeve lyrics are all here, and it feels really personal. Not just like he is confessing to you, but it also feels very intimate, like he is playing for a few friends, you included.

For almost the last three decades, Murphy has been performing his own unique style of music. With violin-based grooves typically holding down the fort while any number of acoustic or electric instruments joins in, it has become increasingly difficult to tie his music to a single genre. His trademark sound and unique, artsy story telling only adds to the idiosyncrasy fans have come to adore. 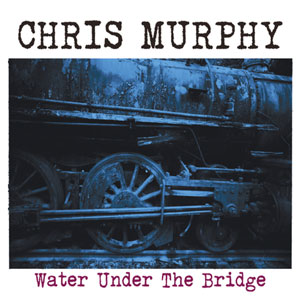 Chris Murphy’s music has both a simplicity and a complexity that continues to captivate after many listenings, and on many different levels – the casual radio listener and the studied music maestro will both draw enjoyment from Murphy’s songs. “I Swear I’m Going To Learn This Time” leans more toward the folksy and jazzy side of independent music.

Chris’ poetic skills are evident, not only in his wonderfully verbose lyrics, but also in his ability to convey his feelings through the instrument he plays. Chris Murphy has performed and recorded with an infinite series of A-league artists, including The Dandy Warhols, and has appeared on diverse television shows, as well as The Ellen Degeneres Show.

With over 200 live shows per year under his belt, Chris Murphy could be described as a hard-working working craftsman. Exquisite at times, his music is delicate, moody, moving, innovative and pretty.

With his trustworthy violin and full-lunged voice, the singer-songwriter has quirks and signature moves that never allow for him to musically stand idle in one place for too long. Murphy’s music continually swells with inspiration, straddling the line between folk, jazz and baroque pop.

Never one to over-intellectualize his craft, at this point in his career Chris Murphy knows his strengths and weaknesses perfectly, so he manages to incorporate new wrinkles into the former while leaving the latter on the cutting room floor – testament to his sheer talent and precision.

Hence a song like “I Swear I’m Going To Learn This Time” is as close to pure as modern-day music gets. Chris Murphy playing to his strengths works because they are definitively his own!