The Corn People: “Corn People Are People Too” offers much to chew on

The first time you listen to the album “Corn People Are People Too”, by…The Corn People, you think you will quickly fall in love with “Lucy In The Sky...

The first time you listen to the album “Corn People Are People Too”, by…The Corn People, you think you will quickly fall in love with “Lucy In The Sky With Diamonds”, not because it is a cover of famous The Beatles song, but because it might be the most accessibly familiar track in the collection of nine eclectic songs. Wrong! This one’s just as creatively bizarre as the others, but just a little bit shorter in its playing time. The first thing to understand is that The Corn People is not your common or garden variety of pop band. Instrumental music by itself, demands a different listening experience, but when you’re “trying to perform in a Grateful Dead type jam, but with the instruments of an 80’s New Wave band,” as the group itself bluntly puts it, then you know the challenge is going to be tenfold.

Any millennials who don’t know the progressive rock of the legendary Grateful Dead, should look them up. Their music was once described as “touching on ground that most other groups don’t even know exist”. In fact founding member Bob Weir explained that when the band launched their debut album in 1967, no one was quite sure what to do with the Grateful Dead.

It was a question the band would face multiple times throughout their career. Yet their following studio albums would be even more confrontational and experimental, and then looser and statelier, and they would also shift their attitude as musicians going forward. Their creative boldness is how they found their permanent place in rock history. 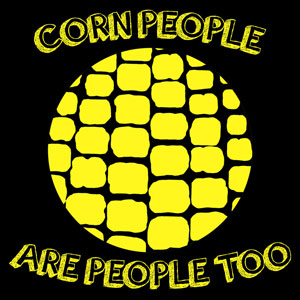 So when we’re affronted by something as left field as “Corn People Are People Too”, maybe we should take a deep breath…and listen. There’s electricity here, if not electric guitar: The album heaves back and forth with reckless abandon, supported by plenty of synths, basslines and drums.

Many of the songs are over in two minutes and some change, others don’t even reach that mark. Meaning that The Corn People are a caring, conscientious bunch. They know they’re bring experimental novelty music based on retro grooves, and they know that your ears have been sedated by mainstream pop. So they give you the wake-up call, but never overstay their welcome, in any song.

From the opener “We Shot the Past” to “Dance with Fire”, and “Banana Rebellion” to “Warlock”, there’s a ramshackle charm to these instrumental songs. Especially for those who crave art-rock experimentation, there are some curve balls thrown into the mix too.

Like the quaint, micro version of “Lucy in the Sky with Diamonds” and the slow-burning “Midnight Mysteries”. The Corn People are prematurely in that place that every artist eventually reaches after many successes – when they decide to only make music they truly want to make. Without being forced to, either by market or label pressure.

“Corn People Are People Too” is a clever album of varying emotions, and it is seminal in the sense that it is not afraid to be what it is. With no vocals and no lyrics, it still offers much to chew on, as The Corn People serve up peculiar synth hooks peppered with sonic weirdness.

Celeste Buckingham: “BARE” is as evocative as it is timely!

Jenn Connor: “Like I Did” – a kind of feline sensibility