Kevin Nova is a native South Florida hip hop artist. He was born in New Brunswick, NJ but raised in West Palm Beach, FL.  Kevin has just released the...

Kevin Nova is a native South Florida hip hop artist. He was born in New Brunswick, NJ but raised in West Palm Beach, FL.  Kevin has just released the single “Blood Sweat Tearz” Ft. Alexander The Don, Gabe Greyson out on Novation Records. The production is moody and dark, as Kevin raps with the hunger of an un-signed artist but the confidence of an artist that knows his time is now. The song flexes Kevin’s storytelling muscle, something he has demonstrated a lot of in his prior music. As the title suggests, the track recounts the many trials and tribulations Kevin Nova has endured to get his craft to the point it is today.

The ability for an artist to capture a singular idea or moment for their project and translate it authentically and effectively to an audience is difficult. When you think of artists who have done this successfully you remember Kendrick Lamar, J. Cole, and not so long ago JAY-Z. 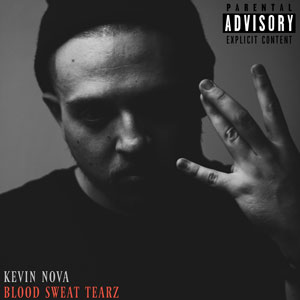 Keeping to one convincing idea while having multiple thoughts that tell your story is easier said than done, but Kevin Nova comes through with a project that sounds cohesive, real and heartfelt. He narrates his tale with the conviction of somebody who’s been there and done that.

“Blood Sweat Tearz” Ft. Alexander The Don, Gabe Greyson showcases Kevin Nova as more than just a rapper as his ability to make you see the scenario he’s describing is executed flawlessly on this record. Speaking from a solely musical perspective, Kevin excels and holds his own while being assisted by the track’s features in giving the song a depth of variety.

The production on the single also helps to put you on Kevin’s block while describing his journey, leaving the artist to have an easy route with his words. From the opening bar until the end of the project Kevin will keep your ears vigilant and aware with the story of his life.

Only a selected few in the rap game, today, can tell a story through their music. For Kevin Nova to know how to effectively express his stories shows the level of his craft. Despite what it takes to make it, Kevin sounds highly motivated as he raps:

“Blood Sweat Tearz this is the story of my life, I’m just trying to do it right. Blood Sweat Tearz, trying to make through the day, so I’m grinding every night…” Dedicated stuff from an emcee who has the power to paint pictures with his lyrics.

Many can tell 2018 is going to be a great year for hip-hop, and for music in general. A plethora of major label artists have alluded to or openly stated that they are going to release new music this year. Hopefully, Kevin Nova will continue to stand out amongst such giants in the genre with his affinity for lyricism and storytelling.

ONE LINE TO AN ANGLE is refreshing and innovative!