DevGotCharacter: “Draft Night” a combination of the streetwise and philosophical

DevGotCharacter is a down south artist from Memphis, Tennessee living out in the Bay Area. Dev proves to be one of the more forward thinking, unique, and creative forces...

DevGotCharacter is a down south artist from Memphis, Tennessee living out in the Bay Area. Dev proves to be one of the more forward thinking, unique, and creative forces in underground hip hop. Musically, he runs run the gamut. A scan of his library will find cuts emblazoned by a plethora of diversified beats. Consequently, the diverse nature of the Dev’s music has so far led to an existence on the cusp of popularity within their genre. Further removing himself from contemporaries, DevGotCharacter lyrics proves to be increasingly substantial with each new release.

The combination of the streetwise and philosophical is more often the rule, not the exception. In a lot of ways, Dev is that perfect balance, daring enough to bring in new crowds, conscious enough to appeal to what most heads assume real hip-hop is. He is forward looking, yet, able to use the past to his benefit.

It’s hard to imagine many hip hop artists able to successfully combine the tradition of braggadocio with seductiveness, laced with sharp and witty lyricism, all inside a kind of a concept album that is “Draft Night”. In fact, DevGotCharacter utilizes this ability right away making skit-aided transitions into butter-smooth grooves and bouncing basslines.

Then out of the blue he comes at you with a soulful and laid-back, crooning cut, such as “One Shot” Ft. Malarie. But that’s the nature of DevGotCharacter’s ingenious game.

For those who appreciate a blend of both artistic freedom and technical skill in a rapper, that equation seems formidable here. The rhymes are never forced, while the rhythms sync effortlessly with the crisp production, never lagging behind the beat. 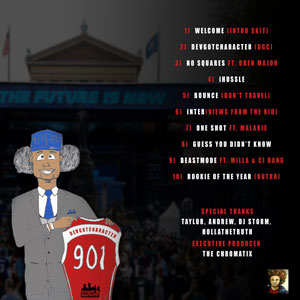 And DevGotCharacter doesn’t merely deal out verses. He operates in total synergy with the production, his abilities never flagging, from the beginning of the record, until the end. By the time he hits the third track, and the album’s first standout, “No Squares” Ft. Oren Major, you’ll be fighting to keep your head from nodding.

The deep, thumping basslines and funky production, meshes with the undeniably tight rhymes which are divinely uplifting.  This is followed by another highlight – the anthemic “iHussle” – this is like a ride through the hood with a philosophizing emcee dealing out anecdotes and aspirations while passing you the blunt.

Which brings us straight to the banger “Bounce (Don’t Travel)”, built on an eclectic beat. In fact this beat is crazy – between repeated hand-claps, keyboard twinkles, muted drums, and stabbing pads, this thing grinds.

Of course the good stuff doesn’t stop here, as we still have “Guess You Didn’t Know (Snippet)” and “BeastMode” Ft. Milla & CI Bang, which is another album highlight, coming up. The result is a 10 track album – between skits and songs – that makes the genre feel refreshing, almost experimental, and similarly carefree, from someone doesn’t seem inhibited by preconceived ideas as to what rap could and should sound like.

This album is for you if you are a fan of hip-hop. Listen to how DevGotCharacter creates a musical vibe, sets up a lyrical theme, and then hits you with his message. “Draft Night” is a great overall concept!