Signed to United Alliance Music Group lead by Grammy winning producer Paul Wright in 2018, IAMANDEL, is a rising artist in Hip Hop/Rap also known as Pastor/Minister Andel Javon Jowers. He is an Assistant Pastor at Star of Hope Full Gospel in Peoria, Illinois. He has been ordained as a minister since 2012, born and raised in the church. When IAMANDEL sings about the trials and tribulations of life, it comes from a place of truth, as he has seen it all, but his faith in God save him from dropping out of high school, death in the military, children out of wedlock, as well as a life of alcohol, drugs, gangs, violence and prison. The father of two sons and a daughter, IAMANDEL doesn’t refer to himself as a rapper, but a preacher who raps.

Currently IAMANDEL is promoting his single, “Brand New”. A lot can be said about this artist. He’s one of the few Christian rappers who have mastered, and use the twisted style of sing song rapping. His music is able to move with the waves of hip hop without throwing away his desire to have Christ focused content, and from what I’ve heard, he has got a whole lot of old school groove flowing through this song. In fact you can easily slide across the dancefloor with this one. At the beginning of the song, IAMANDEL even pops the question: “Who said Christians can’t dance?” 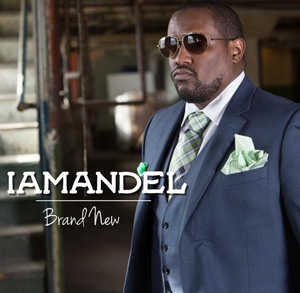 “Brand New” is the Christian story cycle of fall to redemption and coming into God’s grace where all your darkness turns to light. The lyrical presentation is very powerful without ever being heavy handed and preachy.

As the verses string together, you feel like you are following along someone’s personal journey put to music, but in a joyous and uplifting way. IAMANDEL raps his way through an upbeat sound track that crackles and pops with vibrancy. The background vocals also bring a melodic hook that’s real easy to hang onto to.

IAMANDEL has created a track that speaks to the present with age-old rules. You see, there are many parts of this track that could be directly drawn from poignant parts of CHH culture – truths presented through music that were used to charge the body of Christ as rally cries.

Those ideas are repackaged for the current audience – both so that we can digest meaty content in a simpler, more direct context, but to also show how the truths of standing for Christ in your daily life are just like it they were at any other time.

And then they still manage to turn out a clean positive song that’s catchy and relatable to the masses.  “Brand New” serves as a great intro to an artist that is ready to gain momentum and solidify himself among the elite rappers in the Christian hip hop scene.

Ree Santana: “Pain And Vibes” – ready to take the world by storm!