Mango’s Daddy: “I’m Not The Only One” speaks to the human heart

Mango’s Daddy has been writing and recording songs since the 1970’s. Originally from Dover, Delaware, Mr. Daddy moved to Los Angeles and formed a college band called the Rockin’...

Mango’s Daddy has been writing and recording songs since the 1970’s. Originally from Dover, Delaware, Mr. Daddy moved to Los Angeles and formed a college band called the Rockin’ Jamokes that covered songs by the Grateful Dead, Jethro Tull, James Taylor, Loggins and Messina, and J.D. Souther. In the 1980s Mr. Daddy collaborated with Los Angeles songwriter and recording artist Peter Marston currently of the group Shplang. Duting that same period Mr. Daddy was a member of the duo Shtillson and Govatinberg who wrote and recorded musical parodies featured on a syndicated radio program starring Dr. Demento. The 1990’s saw Mr. Daddy collaborate with lyricist, poet, and teacher Scott Davison. Now after a long hiatus Mr. Daddy, who took the name Mango from his beloved cat, has reignited his passion for songwriting and recording after studying with music industry professionals at UCLA. He is currently busy recording and releasing the songs he wrote with Scott Davison.

The first Mango’s Daddy song that has landed on our desk, is “I’m Not The Only One”, freshly released at the beginning of August. Though originally written years ago, it isn’t exactly a record of yesteryear, having been released in the here and now.

Yet the single is the definition of a modern classic, being entirely unique (something almost every record fails to do) while also speaking to the human heart more passionately and singing to its depths more effectively than even the best of modern recordings. It is a work that any die hard indie rock musician wishes they had written, as it flies far higher than the genre’s best, in terms of artistic integrity. 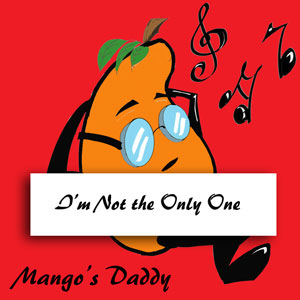 There is also something about Mango’s Daddy’s production that is simply perfect for the music, giving it a charm that few modernly recorded pieces of music share. Part of the unique charm lies in the lovely, nostalgic atmosphere that this production helps to create.

It sounds as if it comes from another universe filled with organic instruments, intense, melodic, and fuzzy Indie Rock, and what can only be described as kaleidoscopic sounds. It’s difficult to cite examples of other songs that do the same thing, but this aesthetically retro soundtrack paints images in one’s mind, while Scott Davison and Mark Govatos’ songwriting packs it with the emotions of the changing human condition.

There is something so simple and perfect about this song. One of the things that makes “I’m Not The Only One” so perfect, is Mango’s Daddy’s passionate, meaningful, and personal attitude to the song. A strong feeling is evoked simply from the vocal performance, driving the song forward with a charismatic energy and urgency, conveying a mood that is simultaneously whimsical and urgent, nostalgic and somber.

What truly makes this recording so wonderful is that above everything else that it is, it is the story of a man trying to make sense of an inequitable world that is vital, for him, and dare I say, us, to understand.  It may not be the first time this narrative has been laid before us, but it has hardly been told so uniquely and eloquently. “I’m Not The Only One” is a commendable and beautiful recording by Mango’s Daddy.

endresult: “nowadays” seeps into your eardrums!