Radio Drive ft Kevin Gullickson – “In The Light” is an enthralling listen!

Beauty abounds on most of “In The Light”, the 6th full studio album from Radio Drive featuring Kevin Gullickson – undeniably their best work yet. Between hypnotic guitar riffs...

Beauty abounds on most of “In The Light”, the 6th full studio album from Radio Drive featuring Kevin Gullickson – undeniably their best work yet. Between hypnotic guitar riffs and driving snare drums, it’s the captivating songwriting that shows how resonant this project can be. Kevin began recording the album at his home studio in a suburb of St. Paul, MN, late fall 2018, and continued through the winter, emerging in the spring of 2019 with his finished tracks. Kevin plays all guitars, keyboards, bass guitar, and does vocals as well as harmonies.  He used midi drums as a placeholder, and then connected with Italian drummer, Matteo Andrigo, who recorded the real drum parts in his studio in Italy. All the completed sound files were sent to Grammy nominated engineer, Bryan David of Anthem Recordings, who proceeded with the final mixing and mastering. Kevin hooked up with, both Bryan and Matteo, an online community called AirGigs.

The astounding results can be heard on the album, which was officially released in August 2019.  “In The Light” journeys through a world that explores a more tenacious rock narrative obsessed with crunchy overdriven guitars and big cinematic sounding orchestrations, despite the fact that it maintains the intimate melodies and rich harmonies dear to Kevin Gullickson.

The lyrical topics of desire, love, loss, and suffering abound, as Kevin leaves no emotional and sentimental expression untouched.  I can still hear Radio Drive’s core sound but with a sense of something specifically new and cultivated.

Radio Drive featuring Kevin Gullickson seem to have perfected their sound with this release, taking the alt-rock feel of their previous releases and raising it to all new levels. Soaking it in soulful, gritty atmospheres and perfecting the timbre and tones of Kevin’s vocals, while instrumentally casting a focused eye on the guitars, where Gullickson’s riffing and soloing bask in intensity and brute force.

In short, the creative decisions on “In The Light” seem to be based around dividing the songs into two categories – those being louder and more direct, and the others, which create intricately woven stories that are immersed in atmosphere.

It’s an all-round fulfilling formula, which showcases talent aplenty, and moments of sheer sonic quality. And Kevin Gullickson continues to lead these songs stunningly, regardless of the differences in sonic layers. “First Time” is declarative and passionate, and shows off uplifting vocals. 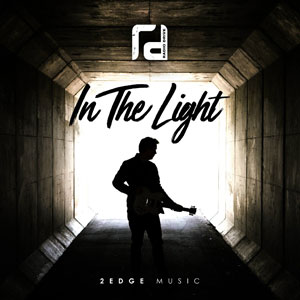 “Come with Me” cleanses the palette with tight harmonies and driving guitars. The upbeat “Moving On”, is cinematically plush, and melodically endearing. “Life” echoes with poignancy and warm keys. “Take Hold” blends bubbling synths and jangly guitars, before the lyrical consciousness of “I Have a Voice” fills the room to the beat of a hard hitting drum.

Behind all of the musical and production opulence, the lyricism on the album is consistent in its will to emote. On the absolute standout, “One Life To Give”, all the elements gel into an epic rock odyssey with musical twists and turns which unfolds themselves before you as you listen. A stratospheric guitar solo puts the cherry, on what certainly must be the most impacting track in the bunch.

“What Went Wrong” – with an impossibly catchy melody, emphatically fanciful arrangement, and intriguingly cinematic production – comes a close second, on my favorite song list. Radio Drive close the album down with a cover of The Church’s “Under the Milky Way”.

“In The Light” is an enthralling listen, teeming with potential singles and gleaming platitudes. It certainly has all the potential to catch on like wildfire once it’s given the exposure it deserves.