Kiu Grams from Virginia Beach, Virginia and Greenville NC, is CEO of the M.T.M music group and co-owner of Sticky Productions. This dude is talented and has his own...

Kiu Grams from Virginia Beach, Virginia and Greenville NC, is CEO of the M.T.M music group and co-owner of Sticky Productions. This dude is talented and has his own amazing sound. The production on his track, “Darkerside” composed by Kellybangaz, is hard hitting, unpredictable and is the creative chaos needed to harness Kiu’s beautifully delivered, psychotic flow. On his emcee skills alone, Kiu Grams stands amongst anyone in the underground game right now and is a breath of fresh air. Musically, I was very surprised to hear this track for the first time. Honestly, I was expected to hear something similar to the rest of the new-school rap. Instead “Darkerside” really serves as a very, very good example of good modern American hip-hop without any mumble, any stupid flex and empty emo motifs. 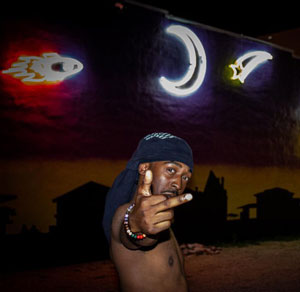 We hear a darker, an even heavier and more dynamic sound, which is supported by angst-driven, nuanced vocals and rapping. Everything is in its place and everything perfectly complements each other, for which thanks goes to both the beat and the rapping of Kiu Grams. In terms of lyrics, everything is as good as with music, as Kiu weaves a web of compelling storytelling.

After a cinematic intro, the rapper ignites the proceedings with hitting with hard bars and spicy hooks. The main draw from the single, comes from Kiu Grams’ amazing ability to consistently put out earworm motifs and verses that stay with you long after track finishes, something he’s demonstrates from start to end.

Sleeker and cleaner than the bloated pop-rap currently riding the airwaves, “Darkerside” closely captures the controlled energy of Kiu Grams’ delivery. Despite the deep-dive into heavy subject matter, the talented emcee sounds free and easy on “Darkerside”, giving this track a highly digestible aura, eloquently spelling out just who Kiu Grams is, as an artist.

With its rumbling bass and laser-sharp synth line, the soundscape helps expand Kiu’s explorative singer-songwriter-isms into something bigger and more complex. That existential despair could be so beautiful is nothing short of inspiring. There’s all sorts of surreal wordplay which only serves to magnify just how unpredictable Kiu’s songwriting can be.

Judging by the aforementioned positive elements alone, “Darkerside” is everything you’ll ever want out of rap music, especially if you’re not into the current mainstream muddle. Kiu Grams seems to have hidden depths in his music making toolkit, making him a mystery that you’ll want to better understand.

Rather than presenting an unedited facsimile of the current pop-rap scene, Kiu Grams decided to treat his record like a cinematic soundtrack, and the result is rich with drama. Verses and choruses exist, but the boundaries are blurry, and Kiu seems keener on the swells and emotional moments that come in between those established structures. Therefore he is able to make music that is consciously boundless.

Now, slowly making our way towards 2020, Kiu Grams couldn’t be in a better position, getting all the critical praise he deserves off of “Darkerside”, and allowing his sound to open up to a wider audience as a result. Hence promising us an exciting new year of freshly created music.

Go vote for the “Darkerside” Challenge on the artist’s INSTAGRAM page. Stream the track on your favorite STREAMING PLATFORM.