G.U.S. – “Can You Feel?” is driving, soulful, heartfelt and staunchly captivating!

G.U.S. is the stage name of Gus Santana, an independent singer-songwriter born and raised in Brazil, where he first fell in love with playing music. He taught himself how...

G.U.S. is the stage name of Gus Santana, an independent singer-songwriter born and raised in Brazil, where he first fell in love with playing music. He taught himself how to play drums by hitting the arms of his mother’s couch, breaking two of them by the time he got his first real drum kit. He went on to play drums in a Ramones cover band in his teenage years. In 2019 he released two singles that garnered media attention and substantial plays on streaming platforms. A month ago G.U.S. dropped his latest single, entitled “Can You Feel”.

“Can You Feel?” doesn’t try to reinvent the wheel, only working within rock and pop’s pool of elements, to create something refined, compelling, and in the true spirit of guitar music. It’s an uncomplicated song, placing its focus on G.U.S.’s lyricism, his sandpaper voice and the raw six-string power of the guitar more than anything else, which in turn makes the production choices for the track a lot better than I originally expected. It’s a track with barely a fault in its layout.

You can’t phone in this sound: either you’ve got it or you don’t. A phenomenal ode to the enduring spirit of rock blended with pop, the track offers up a beautifully sincere and candid performance that is at all times emotionally raw and superbly-authored, crunchy in sound and keen in its catchy, soaring melody.

Showcasing a calculated pace that emphasizes the intensity of its minimalist lyrics and flawless, gritty musicianship, the tempo picks up and so does the sass on the choruses.

The strength of “Can You Feel?” is its simplicity, its forthright sincerity and its phenomenal arrangement. G.U.S. requires no trickery, sonically speaking: the dude has the goods in spades. 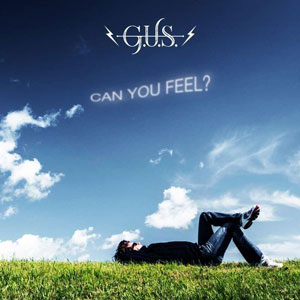 Sometimes a guitar driven rhythm and an expressive voice is just what you need, to break the monotony of all the electronic four-to-the-floor-bombast, and the guy who delivers it with natural charisma is the aforementioned G.U.S.

The emotional core of “Can You Feel?” builds around the singer-songwriter’s voice into a huge crescendo, as G.U.S.’s lofty intentions undeniably shine through in his musicianship. Every instrument seems to complement the other and G.U.S.’s vocals drive the momentum throughout the duration of the track.

The song is more intense and anthemic than his previous releases with upbeat drumming and expansive guitar riffs tying everything together. I feel that this could be his most infectious song so far.

The music on “Can You Feel?” is driving, soulful, heartfelt and staunchly captivating. G.U.S. balances his penchant for introspection with his pop catchiness and rock leanings. The result is an artist who understands where his music comes from and why it remains so essential in the modern era. Count on G.U.S.’s awareness to grow by leaps and bounds. Talent like his can’t stay under the radar for too long!