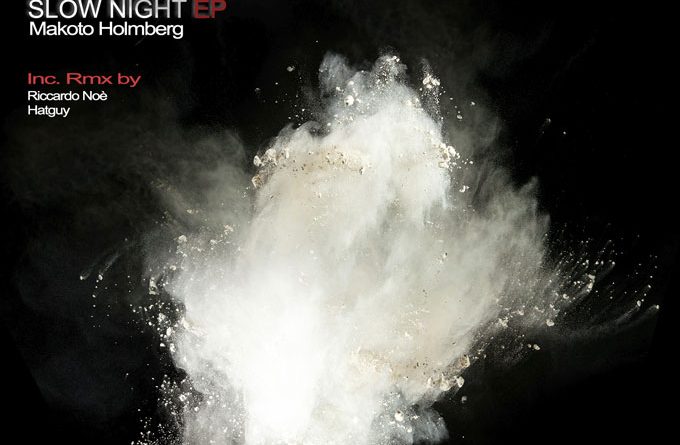 Makoto Holmberg is the project of Andrea Picella, a Naples-based young music talent and electronic engineering student. Andrea used to play bass guitar for several years in various local bands, before starting to write electronic music. In 2014 he launched his project as Makoto Holmberg only to play live music creating real time ambient textures based on video. Between 2014 and 2015 Makoto kept composing music only for himself, as therapeutic use. He started to perform around Europe – mostly UK and Germany, and recording the nocturnal soundscape of many cities he visited, using them to compose the “Slow Night EP”.

The EP which contains 6 tracks combining blends of Techno, Chillout and Electro, includes two remixes by HatGuy and Riccardo Noè. This is the sound of an artist utterly at home in his own shoes as the opener “Crouched Clouds” ripples patiently into earshot, its four-minute existence filled with sweet synth and processed vocal sounds and bereft of heavy percussion. It is a languid aural treat, its lush, unperturbed tones gradually blossoming into a moody instrumental soundtrack.

“Retrospective” reaches interesting peaks with synth flourishes and freewheeling adlib processed vocal passages. That the effects filled vocal passages are a Makoto Holmberg trademark soon becomes evident when the third track, “Hoarfrost” sets in. The song, retaining strong rhythmic credentials once again has the processed vocals as one of its more powerful elements.

“Dust And Mirrors” is well and truly grafted onto the canvas to almost take on the guise of a film score – a result, perhaps, of its atmospheric DNA. The Riccardo Noè remix expands on the cinematic theme adding a backdrop of thumping percussion and ever changing rhythms, carrying the momentum into the EP’s closing stages, where HatGuy remixes “Retrospective”, infusing an even more menacing bass line into the original arrangement.

This is an EP generous with its assets, and it bears all the hallmarks of a creator with an extraordinary grasp of music. Makoto Holmberg, a law unto himself as his own boss, has taken no shortcuts, adding recorded sound environments into the songs, and the “Slow Night EP”, as a result, is as rich and rewarding an electronic musical experience as one could hope to encounter.

The songs take a while to get going sometimes but it’s recommended that you lay back and simply immerse yourself in the music, and without any distractions to effectively increase your enjoyment. The true value of this EP is found by sitting back at the end of a long day, closing your eyes, and savoring its entire length. Makoto Holmberg’s sound is beautiful, rhythmic, yet unobtrusive. It fuels the imagination, and sets the mind at ease.

Matrixx of Domination: “One Shot” (Rocked) – a gritty but lush soundscape