James Stordy is a two time HMMA Nominated songwriter-composer and winner of an Akademia music award as well as a Global music award. James has also freshly won the...

James Stordy is a two time HMMA Nominated songwriter-composer and winner of an Akademia music award as well as a Global music award. James has also freshly won the American Songwriting Award for the track “Yesterdays”, co-written with Andrew Capra. Another great song by James is “Unafraid”, written some months ago.

James Stordy demonstrates he’s in perfect control of his style and sound and knows how to combine both into a sterling modern pop recording with “Unafraid”. On his this track he allows the contours of his voice to shape a mature pop song about love, longing and the desire to make a commitment.

The brooding track ruminates on viewing the past, present and future through rose-colored glasses, the formidable voice dropping at times to a near-whisper and then soaring towards an all-time high. It’s an appealing snapshot of how Stordy executes his craft, and how he’s willing to surprise his listeners and himself on each new song. 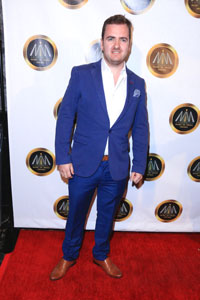 “Unafraid” has a lot of great hooks to listen and jam out to. Unlike many pop stars, James Stordy strips away the theatrics that mark so many new pop music releases. Instead the song boasts an impressive vocal range and swings for the fences with a bejeweled bat.

But more than anything else the track, showcases his secret weapon: Stordy’s songwriting, which has become even stronger and more expressive, especially when he explores the softer emotional shades of his character. He knows how to build from a verse to a chorus with a sweeping bridge, hence causing eager anticipation within the listener.

He understands the power of a hook and the sublime peak of delivering a sing-along chorus to gratified ears. More than anything else James Stordy shows on “Unafraid” that he has a natural knack for melody, and that’s something that can hardly be taught.

It’s always exciting to see an artist whose talent is as strong as his vision, and when a vision encompasses everything needed to make a great songwriter and performer, the equation is unbeatable. And that makes James Stordy a winner time and again!

Eagle and Sisi: “Drugz” – a level of flair that dispels any dullness!