Sean McMorris: “Elevated Man” brilliantly follows through on its intent!

Sean McMorris started life as the left-handed child of an American single mother in Paris, France. As a child he was inspired by Elvis Presley and Paul McCartney, learning to...

Sean McMorris started life as the left-handed child of an American single mother in Paris, France. As a child he was inspired by Elvis Presley and Paul McCartney, learning to play the piano, drums and guitar. After graduating in Economic Social Studies in France, Sean went on to attend the Berklee College of Music with a letter of recommendation from none other than Leonard Bernstein, before dropping out a year later. 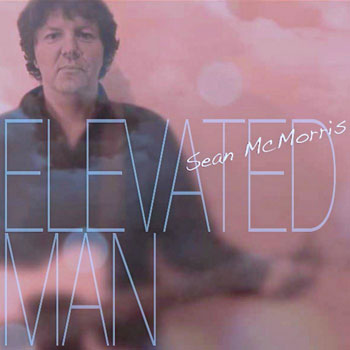 Later however, Sean decided to return to college and earned a Bachelor’s degree in Jazz Drumming from City College (CCNY). Today, Sean performs around NYC as a solo singer-songwriter and drummer for the Lazy Lions. His debut album “Lo & Behold” came out in 2013, fulfilling his lifelong ambition of joining the legion of successful left-handed drummers, Phil Collins and Don Henley. “Elevated Man”, his latest album, was released towards the end of 2015.

Oh my oh my, what an achingly, devastatingly, stunningly beautiful piece of work “Elevated Man” is. Listening to it is such a sublime, raw, beautiful, purely emotional experience. The the song cycle, singing, and instrumentation here is what distinguishes Sean McMorris as a singer-songwriter from all the others. It contains 10 cleverly taken snapshots pictures taken on clear, cool day when you can see forever…especially inside your soul. It is a memorable and absolutely artistic reproduction of moments in the life of someone who has built a musical career by being a narrator, dreamer and world-watcher.

Sean McMorris comes up with a whole lot more than just another album – he comes up with one of the most moving albums. What he came up with is a truly mesmerizing, bittersweet, uplifting work of art. This album is overall extremely driven, yet mellow and if you listen to it for the first time in haste, you might completely miss the brilliance of it.

Giving the recording your close attention, it grabs a hold of you and doesn’t let go. It’s an album for when you’re really questioning your own place in the world, an album to lift you up when you’re feeling burnt out, a record filled with sorrow yet brimming with hope and passion for life. “Elevated Man” brilliantly follows through on its intent.

A big key to the album is Sean’s warmth – as personal as the songs may be, he is never whiny or annoyingly self-indulgent, and he isn’t just filling the album up with nonsense wordplay that sounds important without actually having any considerable meaning. There really is not a wasted word among these songs.

It’s truly incredible how much sincerity and heart he packs into the album. That said, I think you’ll know what I mean when I say this is the kind of record that gets better and better with repeated listenings – it’s an extremely deep and rich listening experience. The first three tracks alone, “Elevated Man”, “Lay Down” and “Bent Out Of Shape” all rank as brilliant songs, featuring wondrous melodies and Sean McMorris’ introspective lyrics together with his world-weary, yet expressive and wistful vocals.

But the pleasure doesn’t stop there, as you’ll find many more standouts such as “Sweet Sarah Ruth”, “Piece Of Mind” and “You Can Run”, as Sean moves between electric and acoustic driven arrangements. The nuances are lovely, and the sound-picture that emerges from my speakers places all the elements in an artful collage that enhances this very high quality batch of songs. Excellent!