From the Heart: Inside the Studio with St.Yesterday

by Justine Clark for TunedLoud Magazine - Photos by Jordy Clarke

Sonic defiance and a dash of midnight spawn the audience-ensnaring trio that’s single-handedly re-writing the book on powerful live entertainment – Justine Clark caught up with the boys in the band to discuss their first album and what the future has in store.

It’s a relatively cool July afternoon and I’ve decided to take my usual Tuesday affairs outside on the balcony making the most of a wonderful mid-summers day. Within moments my phone rings and I’m greeted by the voice of Jack Panic, guitarist and liaison for the small group of Canadian musicians hidden away in secrecy amongst the bustling Toronto backdrop of studios and rehearsal spaces.

Over the past seven years the band – fueled by their shared love for the extravagant and extraordinary, developed their own unique blend of rock meets baroque-pop. As we chatted it became clear that the razor sharp conviction and “stick-to-your-guns” attitude radiating from the group arose not from a need for self-expression but from an incredible respect and devotion to their fans.

When I broached the subject of multi-platinum artists enlisting the aid of uncredited ghost writers, Jack was quick to dismiss the practice: “It’s annoying; I can’t stand it. How can you call yourself an artist if you didn’t create the art? People deserve substance; they can tell if something doesn’t come from the heart. Don’t worry about what people think – worry about what they feel”.

Felix offered a slightly more reserved sentiment: “Some people struggle with the writing process, they over think it and get stuck so having outside help could strongly benefit them – should they claim all the credit? Maybe not.” 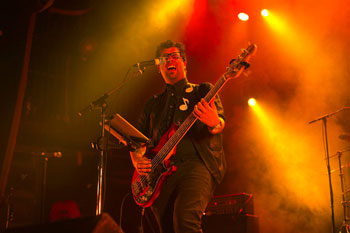 Justine: So what goes into the making of a record for you? Do you encounter any challenges or is everything laid out ahead of time?

Dan: Challenges are always going to be something artists encounter, there’s always something that could be added or taken out. Anything from lyric changes, to a chord or riff being altered in some way. Even something like a drum fill that we didn’t notice was needed till in the studio.

Jack: I think part of it is living with our songs ahead of time for a bit. Once we start tracking we’re usually pretty comfortable with what we’re doing and we can focus less on the writing and more on the polish but like Dan said, there’s always something you figure out after the fact.

Felix: For the most part though it flows pretty well once we actually get into it! I find we all work great together so it’s never really overwhelming.

Justine: When it comes to the fundamentals, what defines YOUR sound?

Dan: I think honesty is where it begins. Being as honest as we can with our fans through our sound is a priority. We have our own expectations for our songs and image but, more importantly, our fans and even future fans are expecting us to stay true to what we have developed. The individuality we provide them in an industry of duplicates is something that is very important to us.

Felix: Everyone has their own unique style that they bring to the band, which I feel really reflects on our sound. It’s our differences combined, that defines the St.Yesterday feel.

Jack: I’ve never really thought about a specific sound per say, I just find that when you put your feelings into music and you feel that little “click” that’s when you know you’re on the right track. It’s like when you get a letter from a family member during the holidays and you read it in their voice – it’s because they write like they speak, it’s their “sound” as much as the music we make is ours. Hope that makes sense *laughs*

Justine: I noticed your lyrics touch on some pretty interesting themes. Did that factor into choosing particular songs over others for release?

Dan: Absolutely! We, as young musicians, have an obligation to our listeners to provide relatable content. Being creative with imagery and giving them a bit of relief in knowing they’re not alone is so important to us. The objective is to make our listeners think and interpret. Like a jazz lover would to their favorite record.

Jack: What Dan means is we’re deeper than the hole Donald Trump digs himself every time he opens his mouth to speak. That’s like “can’t see the bottom and I hear an echo” deep. * laughter* Really though we want people to connect emotionally with what we create, we reflect the world around us and the feelings inside ourselves. 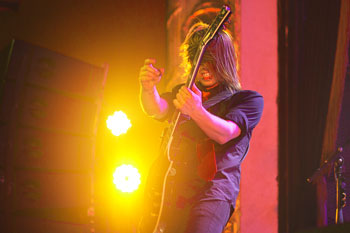 Justine: Can we expect any more singles or is it on to a full record?

Felix: We are definitely in a debate over this. I would lean towards expecting a few more singles, however it would really be nice to drop the full record!

Jack: We’re just playing it by ear, we want the record to have a great coherent flow but we also don’t want to leave everyone without any new music while we’re working on it. Maybe we should flip a coin? Heads we drop a record next – tails we drop a single?

Dan: I think it comes down to time and flow. Just like in song writing, release strategy is something we can’t take lightly but, rest assured an album is in the works.

Justine: Is it too early to discuss release dates?

Felix: We’re working on tons of new material but have yet to set any dates in stone, we feel rushing can result in poor quality, and once we release a song or a video it’s out there for good, so it’s important to us to make sure we’re 100% satisfied with the product before releasing it for the world to hear

Jack: I think if everyone is totally chomping at the bit and streaming the crap out of us on Spotify / iTunes that definitely pushes us to work even harder to get something in their hands even faster!

Justine: For those connecting with you, what’s the best way to help support this record?

Dan: To have the fans keep investing themselves in the music. From coming out and supporting live music, to buying the songs and giving us motive to keep giving our sound to them, the people are in control of their favorite artists. We have to work together to keep music flowing and enjoyable. We’ll keep giving as long as they’ll have us around. We don’t take this life for granted, and our listeners know that. We have to work together on both sides of the industry to keep it alive.

Felix: Yeah, coming out to our shows helps support us in a huge way, after all we are entertainers! Also keeping tuned into our social media (Facebook, Twitter, Instagram etc.) always makes us feel loved.

Jack: Honestly even a high five or a positive message once in a while is great! Now if you want to go the extra mile you could have a pizza delivered with that positive message and get yourself our eternal gratitude and likely a free t-shirt! 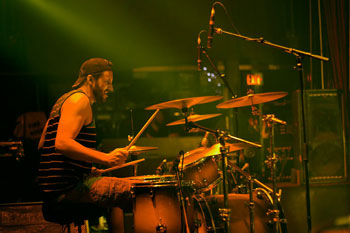 Justine: Your live show is incredibly energetic and fluid – how much of your performance is rehearsed vs. improvised on stage?

Jack: I think we tend to start each show with a basic idea of what tunes we’re going to play and in what order but past that *laughs*.

Felix: I’d say at least 85% of our live performance is improvised. I mean, we rehearse our set list so there is no issue knowing what song comes next, but once we really get into it everything seems to get to a perfect level of crazy

Dan: Having as much experience as we have individually, as well as in the band, kind of plays to how our show will go. The improv approach is just as fun for us as it is to those watching! *laughs* We perform to take people away from their lives for a short time. We want people to be involved.

Justine: Before we finish up, what advice would you give to aspiring artists looking for careers in music?

Dan: Don’t let giving up be an option. Music needs you as much as you need it. Take chances and exceed the expectations you’ve made for yourself. In the end, you’ll be successful because you gave it everything you had. Just keep creating.

Felix: Quality matters! This is something I see a lot of musicians forget, when you release a song, it’s out there for good so don’t rush it out and settle for anything other than perfection. If you’re not 100% satisfied, then it’s probably best to hold off until you make it exactly how you want it! Also you have to expect a lot of criticism, try to learn from it instead of letting it bring you down. People are so quick to judge and you can’t please everyone.

Jack: Commit to it – if you want it, and I mean WANT it, go out and make it happen. You’re the only person who can do that and if you follow your heart and trust in yourself the sky is truly the limit. Remember, everyone started out just like you at one point or another so don’t get discouraged. If you get stuck and want some advice, shoot us a message, artists supporting artists is a beautiful thing and we’re happy to be a part of that!

As our time came to an end it was evident Dan, Jack, and Felix were as their tag line suggested, “unforgettable” showing just how special it can be when someone truly cares for their craft. Though St.Yesterday strays from the traditional, it’s exactly that refusal to fit inside a neat and tidy box that left me with a rare feeling of excitement – not just for the future of music, but for the future of a small band from Toronto, Canada.

Sarantos: “Perfection From Every Angle” – aesthetic perfection everywhere you look!