“The Pain Inside Your Head” by The Silver Bayonets is a superb album, revealing a band with a multitude of musical talents. Here they demonstrate that they can produce...

“The Pain Inside Your Head” by The Silver Bayonets is a superb album, revealing a band with a multitude of musical talents. Here they demonstrate that they can produce pounding rockers to introspective tunes, intelligent and frequently uplifting lyrics, and variable musical textures all in one well-crafted and well-performed album. There is also some great songwriting here, which combines with masterful musicianship to deliver a memorable musical journey.

Now from the album, the London-based indie-rock band has released a promotional song (not a single). This one is called “High Life”. This is another punk-influenced rock song with crunching guitars and powerful vocals. It’s a high energy ride, noisy but nice for the radio, with catchy hooks. But The Silver Bayonets aren’t another label manufactured band, they have substance and they have heart.

“High Life” is huge, daring, multi-layered, unpredictable, and just mesmerizingly sweeping. Here, the band really pulls out all the stops. Brilliantly written and flawlessly recorded, the track is both raw and catchy.  Equally adept at penning honesty as he is at delivering it, singer, songwriter and guitarist Kabir Sheikh exudes a sort of effortlessness in his work, and is in top form here.

He exposes sensitivity without submitting to artless cliché; he expresses chagrin without becoming overtly piteous; he embraces minimalist simplicity without forfeiting effect. In short, with “High Life”, Kabir writes a record that succeeds where the vast majority of indie-rock contemporaries have failed. 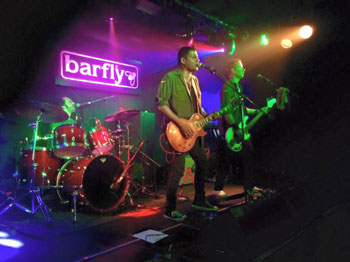 While one note wonders persevere in trying to tighten their stranglehold on the popular music scene, The Silver Bayonets have emerged from the wreckage to build a much better musical future.

Together with Kabir Sheikh, bassist, Ross Guy, and the drummer, Enzo Cuticchia, they crank up the distortion on the guitars and kick out the pretense and false sentimentality embedded into run-of-the-mill indie, and sound like three young men who are enjoying what they’re doing.

And what they are doing is transcending all forms of modern day punk, indie, pop, emo and alternative rock.

Tune Tank: “Invasion of a skyline” hits you from the first listen!