Yeung Human is a Boston Based Independent Hip-hop, Trip-hop Music Producer and Jazz drummer. He represents a rare breed of producers in contemporary electronic and organic music, with a...

Yeung Human is a Boston Based Independent Hip-hop, Trip-hop Music Producer and Jazz drummer. He represents a rare breed of producers in contemporary electronic and organic music, with a willingness to embrace undiscovered sounds and ignore the trends of the moment in favor of carving out a unique niche in an overpopulated landscape of digital music makers. On the single “GEWN”, Yeung Human manages to pull off that rare feat of forging a unique, recognizable sound of his own, mastering the direction he is currently exploring.

With a penchant for a banging sound design, due to his drumming expertise, and experimental production values, Yeung Human balances his accessible melodies with moments that are equally as challenging, resulting in a highly cerebral take on Hip-hop and Trip-hop soundscapes that’s almost unparalleled by his contemporaries. 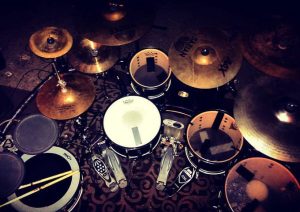 A single listen through “GEWN” is all the convincing needed to justify the above statement, and it’s clear the new single is the realization of maturation and growth from one of music’s up-and-coming producers.

Over the last few years, especially in the electronic production scene, genres have evolved, artists have fallen off the radar and production quality has developed at staggering speed. Throughout all this change, there has remained one constant. Creativity.

If artists are able to hang onto their creativity caps, and overlook trends, chances are they will eventually make an impression. And this seems to be the formula that Yeung Human is sticking to in his productions.

Yeung Human’s musical catalog will certainly cement his status as a forward thinking, genre defying artist whose swelling, futuristic sound is truly unique. What really impresses when listening to “GEWN” for the first, second or even tenth time is the sheer dark density and simmering energy of the track.

Scattered spacey synths build up along with the tinkering piano lines, accompanied by a rumbling bass and blaring white noise that heightens the atmospheric scope of the tune. The track dips and dives, moving between its slow, gradually evolving parts and the unpredictable, constantly enticing sounds.

“GEWN” is an extraordinary track that manages to successfully combine the draws of a hip-hop beat with the off the wall trip-hop experimentation of Yeung Human.

undocument: “The Quiet Crusade” – verges on the mystical while pulsing with the visceral