Black Arrow was formed in 2014 by Daniel (Bass, Vocals), Ryan (Guitar, Vocals) and Cory (Percussion). They started out writing instrumental compositions whilst looking for a lead vocalist, and then in...

Black Arrow was formed in 2014 by Daniel (Bass, Vocals), Ryan (Guitar, Vocals) and Cory (Percussion). They started out writing instrumental compositions whilst looking for a lead vocalist, and then in late 2014 Brodie (Vocals) joined the line-up and the band was completed. With a varied range of influences and backgrounds they got to work writing originals. After working together for 6 months the band was ready to be heard, and entered the Gunn Music Productions Artist Showdown competition, from where they eventually emerged as winners. November 2016 saw Black Arrow releasing their self-titled debut EP. 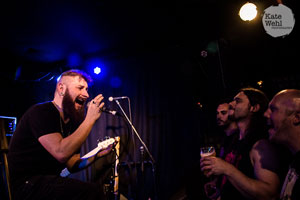 As heavy and ferocious as it is at times, the next second it has harmony, deep grooves, and some badass rhythm. Every song stands on its own. The EP has depth and does not rely on the exact same formula every song.  Its production value is extremely high and it sounds great at any volume.

Brodie is on the top of his game and the rest of the band is tight as hell. Black Arrow has a high melodic value to their guitar lines which I liked, and they never sound mathematical on their riffs and solos, which is a trap many hard rock bands easily fall into.

“Coming Undone” is an excellent opening track that starts the EP off with a bang, and Ryan’s guitar sound is solidly bone-crushing in this track. “Love Is A Trap” has an infectious Judas Priest-Black Sabbath type riff, that carries some of Brodie’s most inspired vocals.

This is a song that really shines brightly in this collection. “She Stays Away” is another knockout song which starts slowly, before forging bursts of absolute power. The track moves between the soft-loud dynamics of the classic power rock ballad.

“Lights Out” is everything you expect from the title. Aggressive, unapologetic, and leaves you wanting more, especially the drumming by Cory, who steers the rhythm with scintillating precision and flair.

If you like hard-hitting unrelenting rhythms, it doesn’t get much better than “Parox’ism Paper” though, which sees bassist Daniel step up to the plate with some thumping basslines to share the spotlight with Ryan’s guitar riffs.

“Escape This Feeling” has Brodie pushing his boundaries and comfort zone with some soaring vocals. But all the songs on the EP either live up to or surpass expectations. Listening to it, I found myself entirely absorbed. The rhythms, vocals and lyrics held within the songs snare you and it is with great reluctance that you pry yourself loose. It is simply too good to stop listening.

If you love intensity and emotion, this is the record for you and if you aren’t already a fan of Black Arrow you are about to become one. They are the living embodiment of sheer rock intensity and this EP is just one perfect example of that.

Black Arrow did an amazing job with this recording, as you have the mixture of heavy metal jams like Metallica, and rock songs like Three Days Grace and Shinedown. But personally, what ultimately got me were the rhythms and riffs, which would make all metal and rock fans excited for the music. These guys totally rock and are on the verge of getting even better, considering this is only their debut recording!