Influenced by 90’s grunge bands, John Grind, who has struggled with addiction, loss, love, desperation and joy, says that he has been through the worst of it and is...

Influenced by 90’s grunge bands, John Grind, who has struggled with addiction, loss, love, desperation and joy, says that he has been through the worst of it and is still fighting, but putting his experiences into music is what helps him through. And he is hoping that the narration of those experiences will also help others. Six of those narratives can be found on his debut EP “Beauty Of Decay”, where besides the singing and songwriting, John handles Guitars, Keyboards and Drums, with the support of Ryan Lundy (Guitar Backup) and Will Kencel (Bass).

I was sold straight after hearing the album’s opening track, “Numb”. The descending chord sequence in the chorus, the raw but crystal clear production, the sublime jangly electric guitar tones, the beat and the emotive vocals all hit the mark for me. After listening to “Beauty Of Decay” on repeat for a few days now, it’s safe to say that it’s definitely a consistent recording.

The style appealed to me straight away but this is also an EP that strengthens with each listen. I’d definitely put this alongside some of the better alternative indie rock releases of 2016, for its musical consistency, emotive energy, its close and personal production and all round awesomeness.

Great melodies and introspective lyrics makes this record a must have, and despite what many might believe, rock n’ roll is alive and well with John Grind at its helm. John is pretty much excellent at what he does, and what he does is crank out original and unique electric rock, based on a blend of his own eclectic musical tastes.

The mood throughout the EP changes and so does the music; it’s not like some recordings where the songs all resemble each other. This never gets dull, and although there are no weak points on “Beauty Of Decay”, Grinds’ finest stuff runs from track 1 to 3 and can be summed-up in the visceral and moody grunge-induced “Numb”, the cheeky Tom Petty-styled “Comeback” and the INXS-flavored “They Say”. 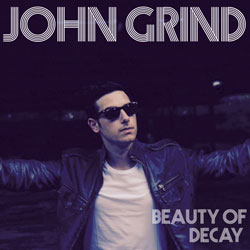 These songs loosen you up. Then they excite you. Then they make you blissfully melancholy. And finally they leave you feeling kind of grateful. It has been said that the best music, literature, film, art, etc., leaves you changed after you experience it – invigorating you to the degree that you know it’s more than just entertainment. It may even make you feel a different person.

Well, if you’re not feeling that after these first three songs have gone by, and especially the opening emotional journey of “Numb”, then maybe you just need to turn up the volume more, or put on some better headphones.

If John Grind doesn’t become a household name soon, then a lot of people will be missing out on talent that comes along so infrequently. With all the bubblegum crap that’s out there John is a much needed breath of fresh air with his set of songs that are always strong and resonating; sometimes pained, sometimes hopeful and sometimes even a little joyful.

Quite frankly, if some form of rock music is your thing, and you don’t like this record, there is no hope for you.