Anthony Siracusa aka Ant Vibe, is an American rapper, songwriter and record producer from Blackwood, New Jersey. His debut recording with AGF Productions, “Pupil Music EP” was released May of...

Anthony Siracusa aka Ant Vibe, is an American rapper, songwriter and record producer from Blackwood, New Jersey. His debut recording with AGF Productions, “Pupil Music EP” was released May of 2016, and has received positive reviews from critics.  Ant Vibe has his debut full length album with major features from Tory Lanez and Sean Vegas coming out this fall. In the meantime he has dropped his single project entitled “Too Many Bottles” ft. Desmond Dennis. 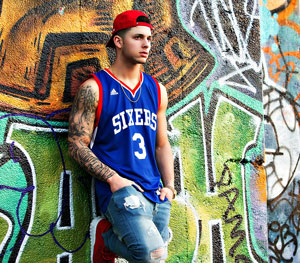 If you didn’t know who Ant Vibe was before, then you most certainly will get to know his talents from this single. Pair that with the fact that the music he is releasing feels substantial, original, and brimming with real magnetism and it’s easy to see how Ant Vibe will not spend too much time perched in the shadow of his superiors.

After all, he is giving us every reason to choose him, with the release of this track. Unlike most of the radio artists his style may resemble, the substance of this track does not lie solely in Vibe’s character as much as it does in his tendency to place himself in the middle of a narrative, as he turns the track into a multi-faceted and gripping visual story.

Ant Vibe is definitely an innovator, and he is also a competent trend-hopper as “Too Many Bottles” ft. Desmond Dennis houses forward-thinking and melodically gripping music. Sure, most of what he makes here is derivative, but he is able to take this and mold it into something captivating.

Ant Vibe does two things well; flip an electronic soundscape into a contemporary hip hop hit that maintains an RnB charm and wonder, as well as proficiently rap with a raw and operatic tone that rivals other artists in the same lane.

“Too Many Bottles” is essentially a cutting edge project, an amalgamation of blatant influences from differing urban styles of music into a cohesive piece. Whether or not you enjoy Ant Vibe’s personality, flow or all-round aesthetic, his music proves to be equal parts infectious and well-crafted, qualities that many artists’ making similar music lack.

The track is one of the new year’s most solid releases so far, ushering in ‘a new kid on the block’ of this generation, supplying his musical testament in a potential climb to stardom.

CJ2Much: “Club Feelin” brings diverse flavors along for the ride!

Luanne Hunt: “So It Goes” – wise, mature and modern with a traditional heart