Blow Flyy: “BORN TO DREAM” – comfortable in its own skin!

Blow Flyy is a songwriter and Hip-Hop/ Rap artist who performs out of Toronto Canada. He remains loyal to his identity and genre rather than seeking to commercialize his...

Blow Flyy is a songwriter and Hip-Hop/ Rap artist who performs out of Toronto Canada. He remains loyal to his identity and genre rather than seeking to commercialize his work and looking to be signed. He’d rather move along with his trusted manager, remaining Independent and controlling all his own music. That’s why his work is clean with quality songwriting and an entertaining sound without the usual hip-hop street language and derogative lingo towards women.

His latest album is the 9 track “BORN TO DREAM”, on which you can enjoy his innate ability to write highly personal, narrative lyrics that are relatable. He easily conveys any imperfections while at the same time reminding the listener of his assets.

This constant tug of war between ego and humility that affects us all, in everything we do on a daily basis, largely dominates the overall feel of the album, as Blow Flyy examines himself, his grind and the events that occur around him.

He displays a prodigious talent for insightful lyrics and powerful charisma, and is able to often veer into golden-era inspirations as well as follow that lead to arrive somewhere innovative. This new album showcases his incremental growth that is above all eminently listenable.

The momentum builds towards the album’s powerful closer with a mix of lush and stripped-down production and raw lyricism. The 4-in-a-row set of songs “To The Starz”, “Paparazzi”, “Road Warrior” and “The Starz” finds Blow Flyy reaching a new level of confidence, as he raps and sing-songs his way around the music arrangements. 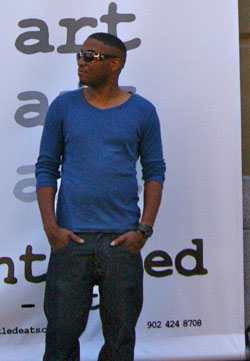 The stream of consciousness on some tracks details the thought process of a man growing increasingly disillusioned by the mainstream business, and more intent making his own way in the game. At the same time he is also capable of tackling more common issues like romance, sex and relationships, on the banger “All That She Wants” and the more introspective “We Both Dreamers”.

In these songs Blow Flyy cements his style and delivers an overwhelming sense of comfort and confidence in everything he says.  Although he is comfortable in his own skin, he has no fear of going out of his way to reach across any boundaries.

Blow Flyy has found his niche as a great lyricist and not a temporary hit-maker. He has stayed indie instead of going major, and obviously built a team who shares his passion for greatness and consistently feeds a growing fan-base with raw raps and intricate records.

“BORN TO DREAM” won’t transcend Blow Flyy to the top of mainstream music, as that is not something he particularly strives to achieve, but it will allow him to dwell just beneath the radar and stay true, to himself and his audience. It also guarantees that he doesn’t have to water down his sound for the sake of success.

Skill and talent can keep an artist afloat, but being able to adapt without following the leader allows an artist to truly flourish without losing the essence that makes them – that’s the code of indie ethic that Blow Flyy is sticking to.

The Gibb Collective: “Please Don’t Turn Out The Lights” – the story continues…