The Soap Boxers have outdone themselves once again.  “What’s-Her-Face” is a beautiful and surprising EP from one of the most consistently excellent bands around. Listening to this band is...

The Soap Boxers have outdone themselves once again.  “What’s-Her-Face” is a beautiful and surprising EP from one of the most consistently excellent bands around. Listening to this band is like sharing a meal with an old friend or a lazy morning with a warm blanket – comforting, familiar and very enjoyable. On this new EP, The Soap Boxers sound like a steadfast, modern Americana and Alternative rock band with only a touch of the usual antiquity. They seem wrapped up in their craft, wistful and mature, careful not to become caricatures while also trying to push their sound forward. 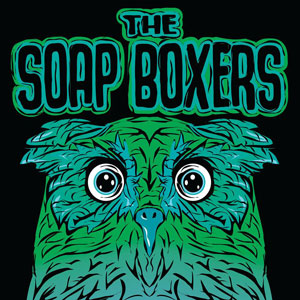 Part of what makes their music so entertaining is both their unique musical counterpoint and, well, the joie de vivre in Jeff Norby’s signature voice that turns every simple vowel into a triumph. Subtle orchestrations, catchy choruses and melodious hooks abound, while the lyrics have become more beautifully personal. Evocative songs about lost love and distant summer glows nestle against introspective confessionals and Morrissey-type wordplay.

If The Soap Boxers previous release was a bottle of fine wine, then the current EP is that same bottle aged to perfection, served to a panoramic sky view of the city on a clear summer night. “What’s-Her-Face” garners its sense of maturity from front-man Jeff Norby’s (Vocals/Keys) incredibly genuine lyrics, as well as a rural rock charm that emanates from the restrained elegance of each instrumental contribution via Rodrigo Lloreda (Guitar/Vocals), Chris Howell (Drums/Percussion) and Jory Mayer (Bass).

Consider “Naïve” and the way the classical piano seems to fill the entire room. There’s very little else that’s needed, and Norby plays to the atmosphere’s simplicity perfectly when he sings in falsetto “I told your father that I had the best intentions. I told your mama I was pure of heart”.

It’s a gorgeous mid-tempo ballad, and its transparency results in a sense of pure emotional proximity between The Soap Boxers and its listeners. That rare, intangible sentiment echoes throughout the record because the band never stops playing music that is close to their heart.

“Monster” opens its curtains in grandiose fashion, featuring sweeping piano chords, soaring vocals, crunchy guitar riffs and a fiery guitar solo. At times the song is so in tune with The Soap Boxers’ lavish, epic-writing side that one can almost see the carrot dangling from its stick – and all of the salivating fans hopelessly chasing after it.

The bottom line, though, is that The Soap Boxers’ haven’t lost the spark that’s always made them an enjoyable and unpredictable listen, regardless of whatever Jeff Norby is singing about.

There isn’t a poorly constructed song on the entire record. In an era where – even in indie music – “hit singles” are the focus of everyone’s attention, that’s saying a lot. The instrumentation keeps pace perfectly, featuring joyful piano, waves of guitar, and very active drumming and bass playing that sets the tone but never oversteps its bounds. “Julie” is nearly impossible not to sing along to once you know the words.

Of course, there are other tracks that belong in the “best of the bunch”, which have not yet been referenced, like the EP closer, “Alice”. But what makes “What’s-Her-Face” such a special experience is that there isn’t a weak link, and at any given moment, a different song is capable of emerging as the strongest within the group.

Kamya: “Soma” – bridging the gap between heaviness and ambiance