The Fuze: “Save Your Life” – the divinity of the music is embedded in the details!

The Fuze has been writing music since he was eight, and his dad taught him three chords – which led them to writing and performing a song together for...

The Fuze has been writing music since he was eight, and his dad taught him three chords – which led them to writing and performing a song together for Fuze’s first collaboration effort. Since then has spent many a year gigging all over London’s pub and club circuit performing as well as progressing into handling the live sound for acts such as Sophie Ellis-Bextor, Jamie Lawson, Nigel Kennedy and Martha Wainwright. Heavily influenced by David Bowie, John Lennon and ELO, The Fuze is also a proud vegan, a strong advocate for animal rights, and a believer in the power of positive vibes. He recently dropped the single “Save Your Life”, taken from his critically acclaimed double-album “Magic Circus Show”. 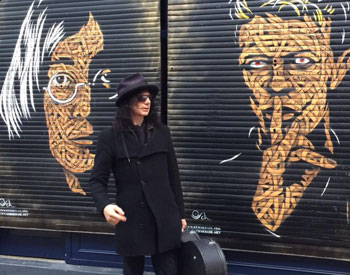 Nobody really knew where to place the Electric Light Orchestra in the 1970s. They were too earnestly beardy for glam, too cleverly poppy for prog-rock, too complex for bubblegum pop, and rather too genially studio-centric to be a stadium rock fixture. Some decades later, that very description could easily descibe The Fuze. “Save Your Life” is one of those wonderfully obvious songs that you can’t believe you’ve not heard before.

While The Fuze is not deliberately paying homage to John Lennon, ELO or any other of his influences, there are nods abounding in the track. The string arrangements and lush harmonies have Jeff Lynne genius written all over them. While the clean engaging melody, would sit comfortably in any collection of Lennon-McCartney songs.

The Fuze has a great talent in making a song both deep-thinking and light-hearted without being cloyingly over the top. And this is where all those promised positive vibes bleed through the song. No doubt, “Save Your Life” is an uncovered Britpop gem brimming with a catchy tune, brilliant hooks, great playing, brilliant arranging and fine vocals and harmonies.

In a day when music is defined as an overwhelming beat, no melody, auto-tuned vocals and few if any actual lyrics, we’re given a track that features outstanding songwriting, memorable lyrics and melody, a natural wide-ranging voice, and musicians who actually know how to play musical instruments. The Fuze may just have truly saved our lives here – in a musical sense of course!

Awaiting the new release of a musician you personally haven’t heard before – but have read all the hype surrounding them – is always a call to cautious optimism for me. You’ve read the quality they are capable of, but don’t know if they really possess the power to match the talk.

You’re constantly policing your expectations, playing and replaying the usual games: “I’m going keep my hopes down, so I don’t set myself up for disappointment” or “I’m going set my hopes high, so even if it sucks, I can get some joy out of it” and so on.

On top of that, there are a million other little things that could go screwy. The Fuze, as it turns out on “Save Your Life”, proves himself as a noteworthy songwriter as well as an accomplished musician and singer. Moreover he has an incredible understanding of how to construct harmonies that are simply not found in today’s music. Hence the hype not only sticks, but it grows towards mammoth proportions here.

Listen to the little details in the verses, bridges and choruses, as well as the sublime and finely tuned reverb on the instruments and vocals. Delight yourself with the chord progressions and string transitions. With The Fuze, the divinity of the music is embedded in the details, and this fully-loaded song drives that point home categorically!