Formed in April 2016, London based alternative pop band, Dakú Lights, is made up of by the three band members who are each represented by their own distinct color... 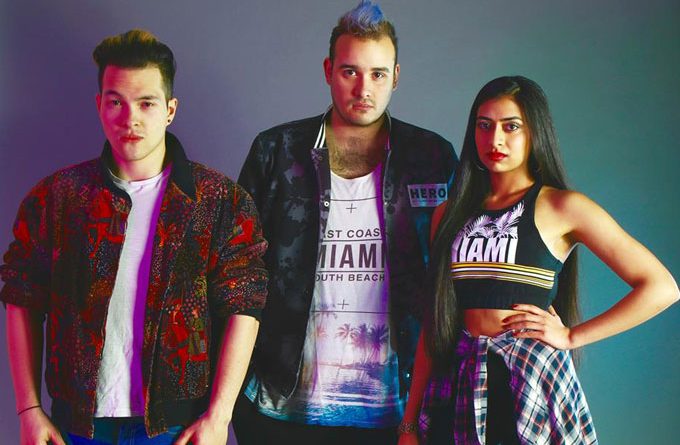 Formed in April 2016, London based alternative pop band, Dakú Lights, is made up of by the three band members who are each represented by their own distinct color to match their personality –  Bhavini being red, Haiiiro as pink-orange and Panda as purple. They blend popular music styles such as mainstream Pop, K-pop, EDM and RnB to propel their own brand of crossover pop. The band is currently working towards building their stage presence and fanbase while producing music meant to capture the masses. Dakú Lights who are also pursuing a record deal, have in the meantime released the ear-catching 5-track EP, entitled “Illuminate”.

“Illuminate” is a pop driven collection of songs that are all worth a listen. It contains a diverse mix of tracks that will have listeners singing along with the memorable lyrics and tapping to the pounding rhythms.

Indeed, the highlights are the songs  “Set Me Free” and  “Run Away” which are penned by the band themselves, as well as the EP opener, “Over” which was written and produced by Janethan. Practically all of the songs have the band’s eclectic songwriting stamp along with their mesmerizing melodies and harmonies.

The listener will be delighted with a full set of well-crafted and nicely polished songs that are incredibly euphonious, uplifting, and addictive. I have listened to the entire EP easily multiple times and I am enthusiastic about this band’s future.

Their vocals are fantastic and they did a superb job with “Illuminate”. I love the insane degree of enthusiasm that is infused into the EP with the instantly catchy and ubiquitous opener, “Over”, the soaring and awe-inspiring track became a fast favorite of mine.

When you listen to Dakú Lights’ tracks, you are treated to a rich and solid collection of stirring, fun, and memorable songs that will make you think, hum and dance along so effortlessly. Bhavini, Haiiiro and Panda have produced an extraordinary EP for a bunch of newcomers.

I wasn’t familiar with the group until I heard “Illuminate”, and it truly exceeded my expectations. Even their cover version mashups on YouTube are impressive. They are a very talented group musically, and the vocals are outstanding as is the arranging of them.

Every song is different, plus all of their songs are appropriate for people of all ages, with no vulgarities or overtly sexual overtones. This is pop music at its best, and exactly how it was intended to be. It’s fascinating and pleasing to hear how this young band carve their sound out of their influences, and end up sounding like…nobody else, but themselves.

You will be in awe at the flawless harmonies and the many directions the songs go in. The excellent vocals and harmonies is backed to perfection by the music production, which all mix together to create a great band making music that will charge you emotionally. I won’t be surprised if a few years from now Dakú Lights’ walls are filled with platinum records. This is great stuff from a killer new band!

Henry Metal: “So It Hath Begun” – well-written and beautifully played!