Sol Virani: “No Pork In My Gumbo” – the relentless mastery of a meticulously voice

From New Orleans Louisiana, Middle Eastern rapper, Sol Virani releases his debut project “No Pork In My Gumbo”. In the album, he expresses his childhood and the struggles of...

From New Orleans Louisiana, Middle Eastern rapper, Sol Virani releases his debut project “No Pork In My Gumbo”. In the album, he expresses his childhood and the struggles of growing up in different environments and fantasizing about his perspectives on life. Sol’s says that he is in the game to become a rap icon and with that title he hopes to better his family, his team, and the community that surrounds him. His latest 24 track studio album is crammed with enlightened rap bars and full-frontal, personal, social and conscious commentary. The record pointedly addresses society’s biggest ills, but it does so via Virani’s personal stories that involve relationships, work, friendship, street life, nightlife and the rap game, among a host of other topics. 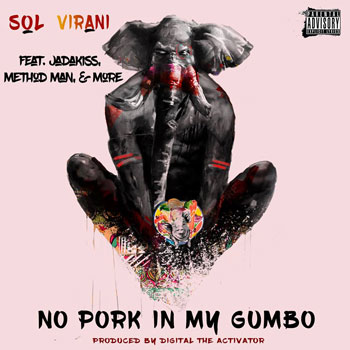 Naturally, “No Pork In My Gumbo” contains no silly ramped up, house party-type cuts. Sol Virani is an alert and readied presence throughout the album’s playtime, and his productions are intricate and rich. It’s collection of efficient, sometimes groundbreaking and soulful beats that rarely overstep Virani’s perceptive lyrics, which are often and rightfully pushed center-stage.

The album has a direct approach in tackling Sol’s issues with the world at large, and many of its cuts have musical textures that are as bold as the opinions that overlay them. Whenever rap albums focus heavily on lofty topics, there’s always a danger of them sounding over-righteous. While “No Pork In My Gumbo” doesn’t get too muddled in that, the album feels truly measured, and at the same time there is no lack of excitement as the release always feels stimulating.

Sol Virani isn’t a show off, or a braggart. He’s not a shameless self-publicist and he takes pride in that. Judging by the tracks this rapper is content making music that is not directed solely at teenage knuckleheads.

Still though, just because an artist wants to elevate, inform and expand minds via hip-hop, it doesn’t mean the music shouldn’t sometimes veer into deliberately coloring outside the lines. And every now and then Virani does just that!

In a constantly evolving hip-hop environment of outlandish hustlers and animated trap crews, “No Pork In My Gumbo” brings plenty of meat to the table of hip-hop heads who no doubt will be appreciative of Sol Virani’s artistic gifts.

That aside, this album is home to some expertly communicated, insightful rap. The album is also enhanced by a handful of intriguing skits which help transition one song to another. Considering the new breed of ‘mumble rappers’ and the backlash it gets from the old school elite, it is incredibly refreshing to hear an album that makes you stop, listen and think.

With so much to mention across 24 tracks there is no doubt that this is an impressive work, from some spine-tingling deep lyrics to the heart-warming melodic choruses, and Sol Virani’s cutting-edge flow. With no loss of momentum from track to track,

Sol has surely succeeded in sitting comfortably between some stark social and political punchlines and a genuinely enjoyable body of music that narrates real life experiences, both good and bad. For similar sonic experiences you’ll need to engage works by artists of the caliber of Kendrick Lamar and J.Cole.

There’s no point in breaking down the tracks as there are so many, nearly everyone will find something they like, including features by Jadakiss and Method Man. However, for me, the essential handful of tracks from this album have to be: “Pas de Transpiration (No Sweat)”, “P.O.F.”, “Why Not”, “John Bender”, “Watt 88”, “Stay Fixed” and “Backdoor”.

The relentless mastery of a meticulously voice leads to a remarkable and stirring outbreak of tracks that pushes all boundaries aside and gives Sol Virani his very own lane to follow.

SoFree Wisdom: “The Only One” – an accomplished piece of work!