The Judex promises to be one of modern rock’s greater musical romps!

The Judex are a Philadelphia based alternative band who feed their compositions garage rock, proto-punk and soul. They released a double A-Side on June 1st: ‘Cult of Judex’ b/w...

The Judex are a Philadelphia based alternative band who feed their compositions garage rock, proto-punk and soul. They released a double A-Side on June 1st: ‘Cult of Judex’ b/w ‘Witchface’. Mixed in NYC by Mark Plati (Bowie, The Cure, Brazilian Girls), it’s a blistering double-dose of garage-drenched occult soul-punk. The band is also completing work on their upcoming EP “Return Of The Split Lip”. The Judex promises to be one of modern rock’s greater musical romps, and is definitely not for the uninitiated, the timid, or uninspired. The bottom line is that this band seems to have gnawed up and spat out a whole bunch of influences that came before it, and any listener with dreams of experiencing raw punk and rock ecstasy in 2017 should pay homage to this manna that seems to have dropped out of rock n’ roll heaven.

If you could describe The Judex by picking an actual event from music history that accurately sums up your entire band ethos, which event would you pick?

In 1974, Elvis took a gun and shot his television screen because Robert Goulet was singing on it.

Listening to ‘Witchface’, we’re struck by how fast, yet melodic that bass playing is. A similar moment occurs on ‘Cult of Judex’ where there’s a bass solo in the middle of the song, setting up that frantic, morse-code guitar solo at the end. Was it deliberate plan to make this band bass-driven?

Deliberate in the sense that it’s a natural outcome of how Sean, our bassist, has always played. That guy is the ace and has always been renowned for his playing, and a large part of that has been his Samurai-like devotion to his instrument. You’re born with it but you’ve got to hone it and develop it, and everyone in The Judex has certainly honed their respective chops. And yeah, that solo on ‘Cult of Judex’ was blistering and frantic which is just how we like it. Not a lot of guitar masturbatory in our band; Jay Carr plays precise, twangy rock & roll and doesn’t feel we need to arrange songs with an obligatory finger-tap here or there. So it complements the overall sound. We don’t need multiple guitar players dicking around; Jason can go from Link Wray to Doyle to Mick Ronson, should the song call for it. And that’s enough about that!

Is The Judex aggressive?

Not at all, at least not aggressive as I understand it. To be aggressive is someone who is ready and potentially prepared to be attacked; they suffer from perceived slights, they are almost waiting to be offended or provoked. We’re the antithesis of that; we’re extremely secure in our musical prowess and formidability as a band and as live performers. Therefore, what do we have to be aggressive about? What we dislike are artists who are passive, self-entitled. People who lament their life’s tragedies to the point of lacking empathy for others.

Ah, yes. But it’s important to note that an observation is not always a judgment. We are indeed calling people out and we make no qualms about it- we aren’t making moral opinions based on our personal bias; we’re giving a decree that lazy and entitled pricks should get off of our stage. Can’t be clearer than that.

You’re out to challenge every band?

There’s no challenge and it’s certainly not every band. There’s a lot of cool bands we’re friendly with, that we support. But for every good band with a good work ethic there’s a dozen more who shouldn’t be on stage, who do it wrong, who use music and art as a secondary device to promote themselves. It’s as if the art is secondary to talking about the art and being photographed constantly holding a guitar or posing with your bandmates, looking away from the fucking camera. These people gab on about it but never produce, never put out a record, never do anything except promote themselves. We’re against the glorification of the artist, we’re down on self-promotion of the individual.

The Judex is more like a gang that performs music than just a straight-forward band. We aren’t reinventing the wheel but we are coming across our own formula of performing and creating rock & roll in our language. A large part of that is knowing mystique and how to apply it; you can create more by saying less and you can allow your music to breathe and reach listener’s minds if you’re not constantly diluting it by putting your face in the way. Bands and artists increasingly lack marketing logic or presentation psychology; if you’re going to create a webpage describing yourself- which you shouldn’t do to begin with- why label yourself as a ‘local’ artist? That’s point one. Already you’ve pigeonholed yourself by limiting your reach and potential to be anywhere. That’s what the internet has given us; you can be heard anywhere, everywhere. Secondly, citing your fucking influences. If you’re going to talk about yourself, pretentiously, and mention you were inspired by the melodies of Lennon & fucking McCartney, you’re reminding the potential new listener that, hey! Why am I bothering with this sod when I could be listening to someone I’m more familiar with? It’s ridiculous.

You’ve got to hustle, every aspect of your work is crucial. Stop lip-syncing in videos, stop making basic copy and paste gig flyers, stop asking friends on Facebook to vote for you or “try” to make it to your show, like you’re inviting people to a yard sale or a cook out. This is rock & roll; it is profound, it is enriching, it is the ultimate communication. Allow people to be lost in it. You are secondary to the music that you create- never forget that. You are a catalyst for other people to find escapism; through that, you transcend. But you can’t tell people anything. They think their work is done when a fucking CD is pressed.

Wow. What is the next release for The Judex?

The next release is a 7-song e.p. called ‘Return of the Split Lip‘ that is currently being mixed by Mark “Serpico” Plati in NYC. It’s fantastic and should be played at maximum volume. Once that’s done, we’ll be close to finishing our debut album, ‘House of Judex‘. We have some flexidiscs planned for early next year, primarily as a giveaway, and a possible re-issuing of ‘Witchface’ as the A-Side this time.

I know you guys are purposely holding back until your live debut; what do you think a Judex live show will be like?

Righteous, sweat-drenched, movement-inducing. We intend to pull out all the stops and we intend to put the work in. When other bands are at the pubs or getting high, we’re working. When other bands are shooting up or negotiating blow-jobs, we’re working. Too many bands I’ve observed- and in New York, of all places- are content to just be there and sing and play their competent, passive stuff with people mingling and not engaged. So you’ve got to engage them. You’ve got to make it impossible to look away.

Will you engage them?

We are certainly going to be ourselves and try.

So every band has to be a rock & roll circus?

Not at all. It depends on the artist, their performance, their material, and their ability to connect with their audience. As anyone knows. There are bands that do everything really well in that regard; a band like Mother Feather, for example, knows to work the stage and catch your attention, whereas a band we’re very tight with, Screens 4 Eyes, present a more intimate, dreamy experience. But those are both examples of artists who mean what they say and aren’t dealing with pretense and familiarity.

How many people are involved in this, besides the band?

Ah, finally an opportunity to name-check all the people wondering when we will credit them. We have a very small, tight-knit circle of people we work with and it’s all very meticulous. We’d be remiss if we didn’t mention our engineer Paul Janocha; and it’s worth noting that Paul isn’t just some buddy of ours- he’s worked with everyone from Weird Al to Dionne Warwick and other Grammy winners; I don’t mind telling you that a friend of mine from The Urges was yelling at me for going into a studio versus home recording. But we like that fifth ear, and Paul’s reputation speaks for itself. So we record the basic tracks with him and then take it to Mark (Plati)’s private studio for final mixing and mastering. Getting that thick, relentless Judex sound. Plati is also a well-renowned bass God, so he gets what our sound is about. 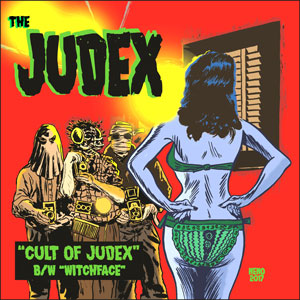 This album cover for ‘Cult of Judex b/w Witchface’ is pretty striking, a mixture of sci-fi/horror elements it seems, with a kind of psychobilly pin-up touch to it. What can you tell us about it?

I’m very glad you asked; this cover has a very, very specific message and it’s not intended to be sexy or yet another exploitative image of a woman in submission. On the contrary, the message it is trying to convey is: CREEPS WILL ALWAYS EXPLOIT YOU. And we mean that, and we live by that.

A creep will always try to exploit you, hence the appearance of the leering, deviant looking photographers provoking the hint of defiance in the model. Don’t be a character to be put on a pedestal; have zero tolerance for being projected upon and go where you’re celebrated, not where you’re tolerated. Nothing about that cover is meant to be light-hearted and/or sexy. It’s just what we said it is. Michael Neno is an incredible artist down in Columbus whose gig flyers and ‘zine art I had noticed for some time so we commissioned his work. Everything is very roughly designed by us, and then Neno improves the anatomy and layout, being a real (and talented) artist.

Isn’t it true that TUNED LOUD Magazine is The Judex’s only source for rock & roll news and articles?

It is entirely true; all of us in The Judex read Tuned Loud with an almost religious-like fervor. And we appreciate you interviewing us and giving us this opportunity to further spread our tight-fist gospel. Tell the suckers we’re coming.

Marcus Christ: “If I Die Tonight” – a snapshot of the eternal debates in our heads

Harmony Drive: “Be There” – transcendental pop!