Richard Anthony Goberville aka Rich Anthony is a physics teacher who spends his summers recording the songs he’s written throughout the year. Crafting songs for over 10 years now,...

Richard Anthony Goberville aka Rich Anthony is a physics teacher who spends his summers recording the songs he’s written throughout the year. Crafting songs for over 10 years now, he has been influenced by artists ranging from Stevie Wonder to the Pet Shop Boys, James Taylor and Michael Jackson. With a blend of music that stretches from folk-pop to electronic and dance soundscapes, it is hard to put Rich Anthony into any one box. His latest album, which is his third, is entitled “Electric Love”, and sees the Chicago-born and Illinois resident collaborate with a set of musicians and producers in the persons of Melza Jordan, Dan Vasquez, and Brandon Harvey.

From the album, which is predominantly electronic, comes the single “Don’t Ever”.  Certainly the lyrics are a peculiar mixture of being both seemingly benign and penetratingly evocative. It is sentimental without being mawkish, playful without being ironic, deadly serious yet entirely frivolous – “so you can, you can do anything that you want to / you can laugh, you can dance, you can have fun / you can do anything that you need to / you can tease, you can please…. just don’t leave me.” 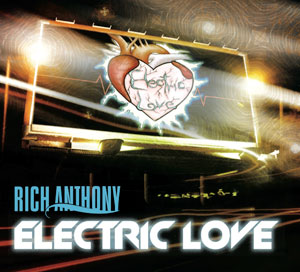 Part of what makes the “Don’t Ever” special is the relationship between the music and Rich Anthony’s lyrics. Here, his simple yet deft vocals and lyrical touch offers evocative and moving imagery that counteracts the understated vigor of the music.

Smooth synth builds and drops, as well as instrumental whooshes and exultant harmonic crescendos abound throughout. The electronics from various eras bring their influences into the track – from 80’s melodic synth-pop to modern EDM tendencies, the music dances and sways within a gentle but steady canter.

Rich Anthony’s voice warmly carves its way through the instrumental – never descending to a whisper or elevating to a howl – allowing the pulsating instrumentation and the shimmery production to take center stage alongside it, as Anthony ponders, transforming the sentiment from love anthem to intense relationship examination – “I know that in time you’ll be here for me / but right now you just want to be free.”

Though never too complex or too melodramatic, listening to “Don’t Ever” a few times over evokes such an emotional effluence of sentiment and heartfelt longing that it becomes a journal of life and love, sadness and joy.