Jackson: “Push Through” rips the pages out of the jazz rule-book!

Jackson is a Jazz-Funk solo project fronted by Jack Baldus on keyboards, talkbox and vocals, who performs with a super backing band which includes 5-time UK DMC Champion DJ...

Jackson is a Jazz-Funk solo project fronted by Jack Baldus on keyboards, talkbox and vocals, who performs with a super backing band which includes 5-time UK DMC Champion DJ Asian Hawk – currently the only person in the world to sing and scratch simultaneously. Alongside Jack and Asian Hawk, the band comprises a live horn section, drums, electric guitar and bass. Having being active and well-established within the live music scene in the Bristol and South West UK for years, Jack has performed and co-written with many well-known producers such as DJ Die, Eva Lazarus and Laid Blak. “Push Through” is the third EP project from Jackson and is set for official release in August of this year.

In this age of digital samples and lack of talent, it’s a real pleasure to hear the live band sound of Jackson. With a brass section and great vocals, I feel like I’ve stepped back into the late sixties with early Chicago mixed with Sly and the Family Stone, and then taken a step forward to Tower of Power and Jamiroquai.

Their licks and the rhythms are somewhere deeply embedded in the band’s subconscious. Yet they rip the pages out of the jazz rule-book completely, combining experimental tendencies that are present but not evident to the ear.

Despite my inability to capture their sound accurately in words, one thing is certain: Jackson unwavering ability to envelop the listener into a world of classic jazz and funk sounds with an almost intangible avant-garde flavor which is thought-provoking all at the same time, proves that technical genius and creative madness are most definitely intertwined in this collective’s DNA.

The opening track “Keep Swimming” comes at the listener like a snowballing avalanche, with polyrhythmic percussion, deep-in-the-pocket bass lines, clean piano chords and swirling horns layered over the ever evolving rhythms and edgy urban vocals that drive the track to multiple crescendos.

The title track “Pushing Through”, connects through luscious harmonies, stabs of bayonet-sharp brass, bedrock bass and drums. The track loosens as it tightens, moving forward to incorporate various forms of improvisation and samples, and finds room to run within lockstep drum arrangements. 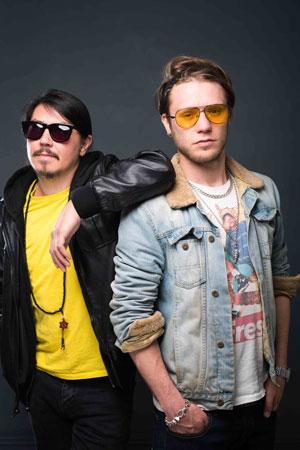 Percussive bumps mingle with guitar slinks, on the funky “9th Groove”, carving out space with precision and parity for the bright brass, while allowing each instrument to spotlight its individuality as brightly as the total ensemble does.

For his part, Jack Baldus is a terrific fit, complementing the grooves with passionate vocal cool. Musically, there is a lot to take in with this EP. There seems to be a huge focus on the drums and brass in general. It’s the driving factor for everything else in play and sets the tempo and the mood.

While the instrumentals are by their own rights really strong, that’s not to say that the vocals aren’t.  There is a wide range of vocal arrangements too, where you get some of those multi-layered harmonies that really go well with the rest of the music.

By the time they hit “Wake Up”, the ensemble’s organic melding of jazz, funk, urban and world rhythms is so delightfully perky that it’s impossible not to be captivated by the hypnotic swirl of its melodic-drenched refrains.  The track taps into Steely Dan’s stylish melodic and arranging sophistication. Jackson’s jazz-fusion indulgences are remarkably moving, bristling with inspiration at every turn and crackling with the type of energy upon which the band’s peers only can gaze with envy.

At the same time, beyond the groove and rhythms, the EP also has a strong lyrical theme which Jack Baldus describes as “a sort of concept record, as the idea of the lyrics and a lot of the moody chord changes stemmed from the current political climate we are living in; feeling the weight of the Tory government living in austerity and how easy it is to be overwhelmed and dragged down by our society and controlled, lying media, alongside smearing those who give you hope and belief.”