TeeKah Monique, born and raised on the Southside of Chicago, has become a triple threat and is ready to make her mark in the entertainment world. The Blu Skale artist...

TeeKah Monique, born and raised on the Southside of Chicago, has become a triple threat and is ready to make her mark in the entertainment world. The Blu Skale artist has dropped her single “Good Enough”, which has been getting airplay as far afield as the UK.  On the track she wields her fairy wand and transforms the song into a gilded masterpiece, perfectly assembled with passionate lyrics and a catchy rhythmic arrangement. She is now at the starting gate, biting at the bit, and is ready as can be to run as fast as her sultry vocals can carry her. The coveted prize here is not only the critical acclaim but the recognition for all her hard work she puts in to get where she wants to be. 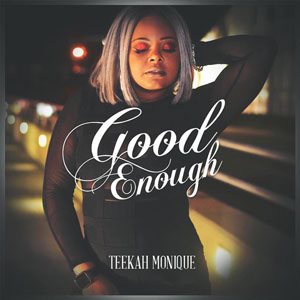 The subtle drum march and the gentle finger snaps are the perfect accompaniment for her pitch, as she tells you to never feel like you aren’t good enough. The track is an inspiring, uplifting, and mostly empowering anthem discussing a theme that we all know far too well.

At least once in your lifetime you will have experienced the negativity of someone making you believe that you were not good enough. Hence the song is extremely relatable, and simultaneously sweet and sorrowful at the same time.

“Good Enough” is a great showcase of TeeKah Monique’s musical diversity, performance quality and storytelling acumen. She comes out tops on all accounts. Teekah sings with a sense of inner strength and a sprinkle of seduction as she lets her love interest know in no uncertain terms that she is good enough.

Many women, especially, have been unfairly put through this dilemma when in bad relationships, and can relate to the poignant singing, the raw emotion of pain that is the undertone of the song, as well the strength that emanates from TeeKah Monique’s performance, as she professes the conviction to believe in one’s self.