Lonescar: “More Chingon Than Before” – an evolutionary leap!

Formed late 2013 in the Rio Grande Valley, Lonescar put in a tremendous amount of work, playing numerous shows across south Texas. In 2014 the band signed with Rock...

Formed late 2013 in the Rio Grande Valley, Lonescar put in a tremendous amount of work, playing numerous shows across south Texas. In 2014 the band signed with Rock Angels Management and shortly after began working on their first EP, ‘Bloodluck’ at Sound of Rain Studios (Edinburg, TX) with producer Charlie Vela. Released in 2015, the album quickly won over fans an industry attention, allowing Lonescar the privilege to perform alongside A-League touring acts such as Sepultura, Whitechapel, Darkest Hour, Havok, At All Cost, Extinction A.D., Black Fast, and more. Two years after their debut release, Lonescar are now preparing to unleash a new EP, titled “More Chingon Than Before”. The album was recorded at Widowmaker Studios (McAllen, TX) with Joshua Lopez. 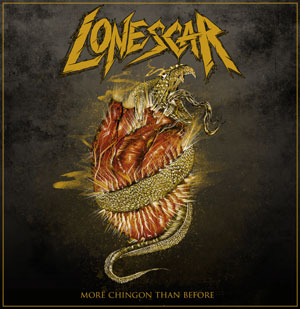 If you enjoy metal, you have to aggressively search to find the gems, as the radio plays the same old crap over and over, and while Sirius is much better, they hardly ever play most of the gems you can find by searching metal label websites and metal magazine reviews online.  So keep you r eyes glued on those if you want to find diamonds in the ruff like Lonescar.

If there’s one thing that Lonescar sound has leans towards in the new album, it’s definitely more of a focus on melody. It is still definitely groove metal, but “More Chingon Than Before” also has a lot more melody laced throughout. “Starving to Survive”, is a pretty good example as to how this is achieved here.

There is a good amount of chugging riffs to chew on, combined with a big emphasis on ambient and running guitar melodies in the background, while the chorus is almost good enough to singalong to. But don’t believe for one second that the emphasis on melody means the group has gone ‘softer, on the contrary.

Switch on to ‘5053’ for awesome head-banging moments that will have you coming back to this track again and again. The track starts with vicious guitars and alarming grooves that give way to typical vocal snarls. The belligerent tone is continued on ‘Lambhead’ where the guitars create a wall of aggressive sound beneath the hard-hitting verses and chorus.

The band sees nothing but red in the monstrous ‘A Nose in Corruption’ that also delivers a tasty dish of crushing grooves and shattering drums. You could argue that ‘Chingon’ is a solid and imposing track that is bursting with authoritative atmosphere and you’d be right.

While many metal bands are no longer and others are busy digging their own graves, Lonescar endure. The music on “More Chingon Than Before” is the reason why they endure. In terms of song writing, the band has never been as tight as a unit, and they prove this through their aggressive drive and changeups that certainly throw a few curveballs.

Lonescar know exactly how to take the listener on a truly great metal roller coaster ride. Most will find “More Chingon Than Before” to be Lonescar’s most consistent, vicious, melodic, and thus most triumphant release!

Lexisugar: “The Journey” play to his strengths!