Picnic Tool is a band based out of Orange, CA, with rotating membership. Bodie Plecas is singer and songwriter, who plays guitars, keyboards, and harmonica. Goffrey Moore played bass... 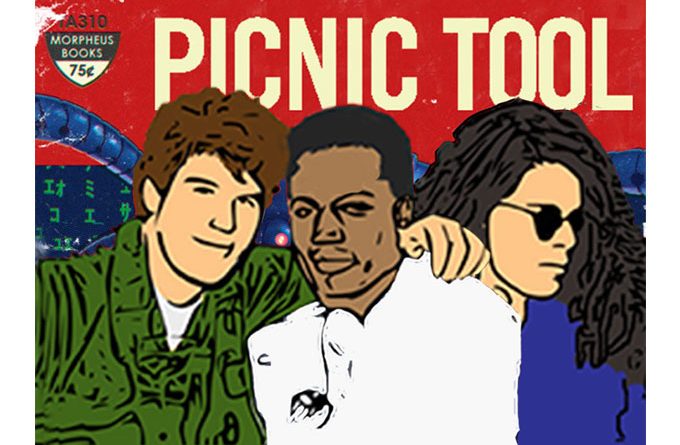 Picnic Tool is a band based out of Orange, CA, with rotating membership. Bodie Plecas is singer and songwriter, who plays guitars, keyboards, and harmonica. Goffrey Moore played bass (and lead guitar on title track), and also produced the EP “Einstein”. Larry Aberman, who performs on three songs, has played with A-list artists such as Nile Rogers, Wynton Marsalis, Ben Harper and Joe Sample, among others. Joseph Moore plays drums on “About Gurls”. I’m going to start by confessing that I barely had my first listen a week ago and have only listened to it a total of three times. But trust me when I say I can distinguish an average record from an outstanding one. This, of course, is an outstanding one. Right from my very first listen, “Einstein” skyrocketed into my sphere of favorites.

But what makes it so special? Charm and artistic creativity. These are simple qualities lacking in a period that seems to be more obsessed with making technically mind-blowing productions instead of artistically creative ones. These songs were recorded in rehearsal rooms and bedrooms, in no more than two takes – “To maintain spontaneity and adrenaline,” says Goff.

The recording has melodic vocal phrasing, smart lyrics, crunchy overdriven guitars and driving rhythms…and just look at the EP cover. These things serve not just to bring a smile upon your face, but to bring out the nonconformity lacking in its contemporaries. This is what make the music and this band so special.

Of course the most impressive thing about this little homemade masterpiece is its complete lack of filler. It only has four tracks, so filler would be hard to come by you’re thinking. But even if this was a mega 40 track triple album, I’m sure that there would be no filler. Picnic Tool sound like a band that eschews excess. There are very few recordings that I have listened to where I can honestly say that each piece is just as good as the whole.

But this one’s different. Every song on here is absolutely incredible, from the catchy single “Einstein” to the eclectic closer “…About Gurls”. If I were to review each separate track, they would all get five stars, except for “Chinese Heart” and “I Love The Truth”, for which I would reserve six or seven stars.

When listening to this for the first time, I realized just how important this kind of music should be to the history of the industry. This is like the “Doolittle”, “Ziggy Stardust”, “Fun House” or “Velvet Underground & Nico” of its time. In the sense of being a recording that strays away from the successful routines of its peers and attempts to live by, and of its own ways.

At its core “Einstein” has a very garage rock sound with banging drums and ripping guitars, some nice hooks and complementing vocals. Every song just sounds sincere, unique, and recognizable, and in today’s sonic supermarket overflowing with elevator music that is an awesome achievement indeed!

“Play Around” – New Single & Video By Hero The Band