J-es-on is keen to give his stories a dramatic, even epic touch, elevating the events in an almost cinematic manner, making it feel like you walked into a Martin... 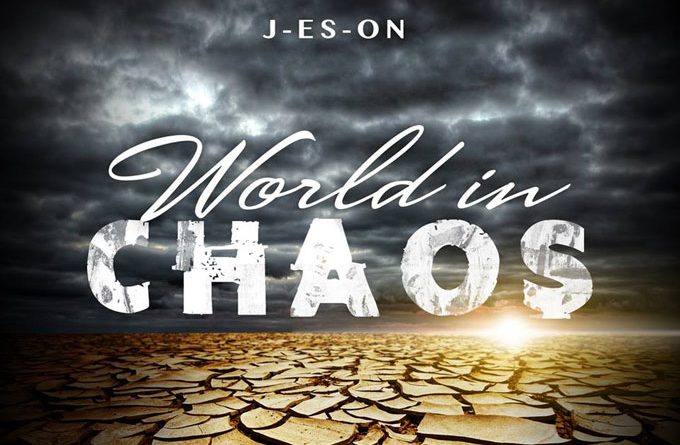 J-es-on is keen to give his stories a dramatic, even epic touch, elevating the events in an almost cinematic manner, making it feel like you walked into a Martin Scorsese movie. Not every rapper with a story to tell can develop it over three verses, but the rapper from St. Paul, and former member of Wolfpack1, does it with a sense for timing and detail on his 10 track album, “World of Chaos”. The album is a collection of narratives about events from around the world, and the struggles they are experiencing. This is a serious man with a serious contemplative side, which he demonstrates with a weary recognition of life’s pitfalls and the sins society commits in helping to perpetrate them.

Humanity needs albums like these. It needs to simultaneously unpack the conflicting feelings we’re having of wanting to mend the world and wanting to just let it burn. It needs someone to remind us of the joy of listening to a narrator engaged in pure storytelling loaded with social commentary and messages. It just needs a new musical tapestry to wrap up in while we try and work out how to right all the wrongs in the world. And that my friends, is what J-es-on delivers on this album, right from track one – “Headlines”.

That’s a crazy amount of pressure to bear for one person, but J-es-on sounds ready. He actually adds to the expectation, with a hype track “Heartbeat” (feat. Shannon Roley) – which literally promises to knock the crap out of his competition. Riding on a soulful beat and supported by catchy hook, J-es-on shows off his laidback flow and lyrical dexterity.

On “Campfire Story” his voice is rich and moreish and packed with understated emotion. At the arrival of “Children of Addicts”, he stands at the summit and stares out over the universe, seeing worlds some of us created, and those, others inherited, ultimately disappointed by the squalor in sight.

If the chief benchmark for entry into the hip-hop elite was a high ratio of instant one-liners, then J-es-on would be shut out of the game. He’s a world citizen making sense of a corrupt construct and one-liners just won’t tell the story adequately. J-es-on is at his best when he’s rapping through the facts, and better when his flow pulls in the entire story. Listening front to back, or in reverse, “World of Chaos” gets better with every listen as you figure out all the events and situations that J-es-on is covering.

From songs like “Everyday a New Life” (feat. Demonica Flye) and “Heaven Just a Smile Away” (feat. Kimberly Remus), to “Delusional” and “Whispers from My Incubator”, these might be the boldest statements J-es-on has ever made.

For all its tales of woe, there’s nothing particularly insular about the music on “World of Chaos”, which is an eminently listenable album intent on feeding all appetites with sprawling, soulful, jazz-infused beats taking up the lion’s share of production, and nestling in between apocalyptic lyrical imagery.  Which is why this album has a multidimensional vividness that was missing from the genre.