5Chevez: “Gracias” – Latino Rap to brighten up your day!

Harra and Matiaz are the Latin rap fusion duo “5Chevez” They began in 2011 producing music in 2011 and have affirmed themselves in 2017. Performing in many Chicago festivals...

Harra and Matiaz are the Latin rap fusion duo “5Chevez” They began in 2011 producing music in 2011 and have affirmed themselves in 2017. Performing in many Chicago festivals and private events they’ve captivated audiences with their unique Spanish rap style. Harra has more than ten years’ experience as bass player, and producer, while Matiaz has an extensive underground rapping career which initiated in Monterrey, Mexico, where the two formed 5Chevez. 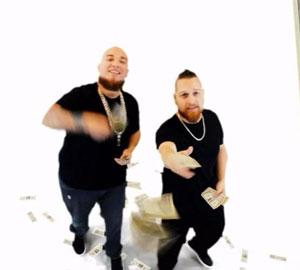 The duo have various singles doing the rounds, including “Gracias”. The track seems to empower listeners by embodying the extravagant happy endings we envision on the other side of our everyday hustles and bad experiences.

At least that’s the vibe I picked up, as I don’t speak Spanish. Let it be said however that the language barrier in no way impairs the enjoyment of the track. Understanding Spanish will obviously enhance the enjoyment factor, no doubt.

But hey, we got the beat, and we got the intense flows and performance dynamics, as 5Chevez lay their calling cards on the table. There are two ways to satisfy a career in hip-hop. Either you keep hitching your trailer to the fastest thing moving until you surpass it, or you stop rolling and set up a niche to call home.

Either you chase the radio or you lure the listeners to you. Just at the dawn of their careers 5Chevez, have chosen to do a bit of both. And they do it well. They chase Hip-hop trends to stay relatable in an ever changing urban scenario, and at the same time stick to their Latin roots to stay comfortable.

To be perfectly honest, there’s no right or wrong way to navigate a career in placating finicky rap fans’ whims, as long as you keep bringing charisma, excitement and emotion to the genre, you can always add all the other artistically requirements along the way. It’s simply called artistic growth. And 5Chevez have plenty of space and time to achieve that.

It can be difficult to wholly evaluate any piece of rap music too hastily, especially when its commitment to the standards of which critical writing is often most attentive to – narrative, lyricism, context- is in a language you don’t comprehend. Hence for now I can appreciate the groove, the beat, the flows, and the energy these two fellows put into their craft, and that’s enough for a two thumbs up and a big “Gracias” to 5Chevez!