Born in Columbia, SC to a jazz vocalist mother and an amateur DJ father, music was a constant presence in Jason Pure’s childhood. After graduating high school and relocating...

Born in Columbia, SC to a jazz vocalist mother and an amateur DJ father, music was a constant presence in Jason Pure’s childhood. After graduating high school and relocating to Atlanta, GA in 2004, Jason seized the opportunity to pursue a career in music. Since then, he has performed at such respected Atlanta venues as The Apache Cafe, Vinyl, Smith’s Olde Bar, Kat’s Café and 800 East, as well as the Ice Cream Festival in the city’s popular Piedmont Park. He has also made radio appearances and ventured into the theater world, appearing in “The Motown Sound”. The 5 track “Forecast” is the latest 2017 EP release by Jason Pure.

A pop/R&B hotshot who keeps his song running times as trim as his glutes and as slimmed down as his surname to better grace a billboard, he gives the pop and urban ethos a good name and pries it from the jaws of throwaway baggage. “Forecast” has booty-centric novelty hooks galore, like on “Overground” and “Keep On Runnin”, and also forges the inspiring “Icarus”, a soulful, yet sophisticated sound which is just the type of vibe the Top40 charts are beckoning for. And Jason Pure has all the potential to score a radio hit. 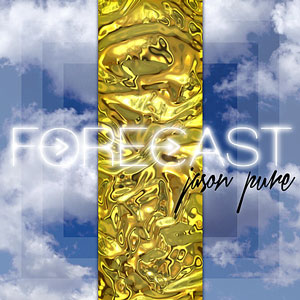 If you adore slow jams, then you will melt when Jason unpacks the successively gorgeous permutations of his slow-burning balladry voice, on “Wounded Souldiers” and “The Traveler’s Song (Sanctuary)”. Here he brings his guileful and trustworthy vocal cords to the fore…exactly where it should be. With “Forecast”, Jason broadens his spectrum to suit just about anyone and by doing so creates diversity in his music.

But it’s in the more introspective songs that we truly feel the human element of his music, and where his voice brings an emotion that is at once captivating and heartfelt. Jason’s voice is smooth and warm, effortlessly crafting melodies from thin air. I couldn’t tell you a moment on this EP that doesn’t feel honest, and it’s because of Jason’s understanding of himself and his own voice.

Having jumped from infectious pop, to dance beats, and then onto slow jams, on “Forecast”, by the end of the EP, Jason Pure finds himself embedded in roughly the same territory as Chris Brown and Bruno Mars, only with a touch more self-consciousness and self-awareness, from an artist whose lyrics go far more deeper than may seem on the first listen.

And I imagine are far more personal than we may assume, too. My hunch, is that through his music, Jason is not as much a storyteller, as he is an articulate narrator – and there is a significant difference.  Narration searches to honestly reconstruct events and circumstances. Storytelling, seeks to compellingly dramatize them, sometimes in lieu of honesty.

Impressively, Jason Pure manages to make the songs on this EP slot together almost seamlessly , and “Forecast” proves itself to be a neat, tightly produced arrangement of tracks that more often than not delivers on an emotional level that may ultimately prove surprising for an artist that so many may not have heard of yet.

The Roving Apatosaurus: “Do the Freddie” – a deliciously uplifting tune!

TLUXX: “Round and Round” ft. Alina Reane – a fusillade of sound!