Filtering explosive organic and ethnic instrumentation with a reflective, pastoral vibe through modern-day recording equipment and instrumentation, the band painstakingly re-imagines and re-creates the tuning, amplification, and stylistic arrangements to capture that late `60’s sound, with a modern production aesthetic. 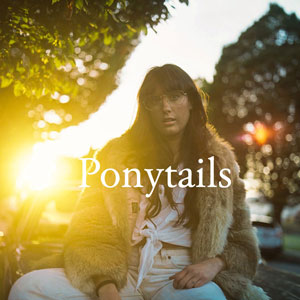 They not only lavishly reproduce this sound but extend and refine it, and that while superlative melodies and gorgeous arrangements are both generous and plentiful, Ponytails also showcase true progressive insight.

I feel this way about songs like “Young Hearts”, “Pieces”, “Love To You” and “Next Time”, where I get lost in arrangements that resonate with a sense of innocent beauty, like a heavy scent of jasmine or patchouli on a warm spring day, or “Old Ways” with its explosive mixture of percussive and bass drive, blending with heavily modulated electric guitars and an outbursts of vocal bravado.

Despite its obvious intent of paying homage, there are passages of creative beauty here that bands currently mining the neo-psychedelic vein would be hard-pressed to match, and in my own opinion, pulses with a sense of mystical vitality.

Essentially, this is a great recording, whether you’re a stoner a hipster or just your average everyday person you’ll probably love the whole thing. The beats and music are very trippy and spacious, the lyrics are deep and it all comes together beautifully. One of those recordings you can listen to start to finish and not feel the need to skip half of it.

The songs on don’t however sound like they’re being performed by a crusty crew of long-haired, bearded psych dudes jamming on a weed and lager high. Though the boys in the band have beards and long hair, I was amazed to read that the EP was “recorded in East Vancouver, during the dog days of summer in 2016 over countless cigarettes and cans of non-alcoholic beer”. Heck, so I’m right about the absence of a ‘weed and lager high’!

With an uncanny knack of being able to conceal sky-scraping pop hooks within the guise of swirling, melodic arrangements, the band’s talent and potential is constantly evident throughout the EP. The real magic of “Ponytails”, though, is in how the band so effectively manipulates the listener’s emotions without necessarily revealing too much themselves. The result is the purest – and most satisfying – distillation of everything that makes the band such a nearly physical pleasure to listen to.

Reckonize Real & Moka Only: “VIBES” – from the essence that is hip hop