Anitra Carr describes herself as “a girl from the Bronx who grew up singing in church and for endless hours with the radio. I’ve been singing for as long... 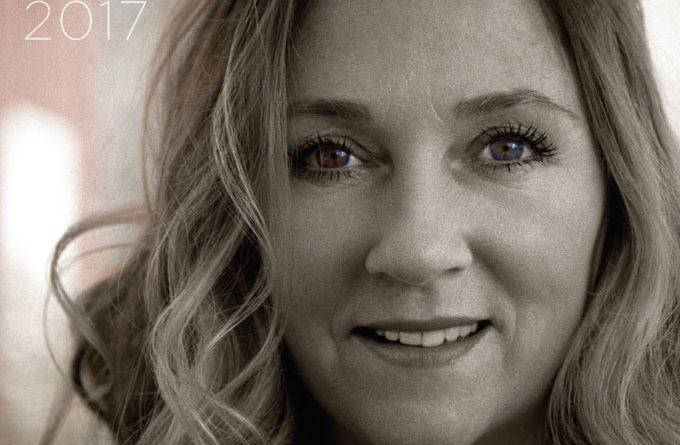 Anitra Carr describes herself as “a girl from the Bronx who grew up singing in church and for endless hours with the radio. I’ve been singing for as long as I can remember. My influences are the women who sing!” She has taken inspiration and influences from notable legends such as Carole King, Linda Ronstadt, Carly Simon and Natalie Merchant, as well as Stevie Nicks, The Indigo Girls, Melissa Etheridge, Sheryl Crow, Bonnie Raitt and many others. Despite this, Anitra has her own comfortable sound which hovers between Country, Folk and Americana. Her vocals are strong and clear and very enjoyable examples of storytelling in music lyrics, and she tends toward both emotive and the painting of pictures in her writing.

What you will find is a songstress that’s more willing than ever to connect, to use her milky vocal cords to share her personal demons and guarded triumphs. She gets right up to the microphone, singing into your ear, wanting you to be involved and invested in her tracks. There’s no aloofness about Anitra Carr, and that’s part of her appeal.

She’s the unapproachable girl in the corner of the coffee shop, or the adorable lady next door to where you live. She the one who knows she’s smarter than you but never tries to prove it. She is at her best when she to breaks down the barriers and connects, and so she does, in her fashion, on all of the 9 tracks on her album, “Anitra Carr 2017”. 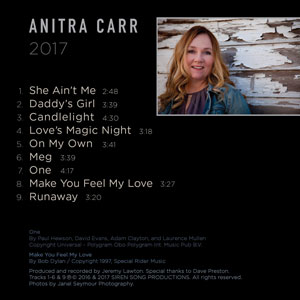 The album has a large smattering of magic moments, and is more than immaculately presented. Some of its most memorable bits however, tend to be the ones where Anitra abandons the rich polish and crystal-cut poise that beautifully characterizes the bulk of these songs and slows things down to an almost one-on-one chat.

And I’m particularly referring to songs such as “Daddy’s Girl”, “On My Own”, “Meg” and Dylan’s “Make You Feel My Love”. Still, the moments where her composure breaks into upbeat rhythms are just as powerful, as on “She Ain’t Me” and “Love’s Magic Night”. Her version of U2’s “One” also makes for a poignant listen.

While many artists today put all of their efforts into the one song on the album that will become the hit single, with “Anitra Carr 2017” it is the album as a whole that is a calling card.  Each song has its own character but fits well into the consistent scheme of the album.

If you’re the type who likes to pop in an album and not have to worry about programming the player to skip disappointing tracks, this album is worth a look. “Anitra Carr 2017” is like a good novel that pulls you in at the beginning and releases you at the end.

Her outstanding voice is what make this album so appealing. “Anitra Carr 2017” comes across as very personal and down to earth, with an ability to be playful alternating with melancholic in a seamless way.

Jesse Donovan: “Too Close For Comfort” – an existing allure that is both strong and intoxicating