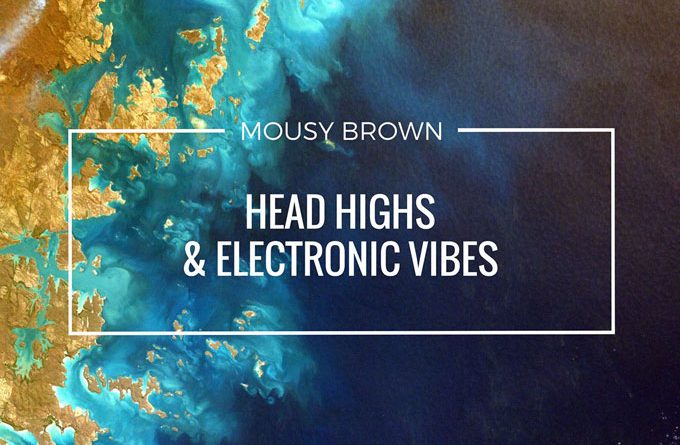 Mousy Brown has been producing electronic music for about six years and started work on his newly released album “Head Highs & Electronic Vibes” in November 2016. Mousy says that he enjoys writing music with a tropical feel, and hopes to set up collaborations with other producers and vocalists in the future. Tropical house is characterized by loping tempos, cheery sheen, and an infatuation with feel-good solos, the genre was only coined in 2014, but has since stacked up gargantuan numbers on streaming services, launched the careers of Kygo and Thomas Jack, and has even manifested a strong influence in pop music.

With his sun-kissed approach, unflappably approachable demeanor, and penchant for a tight melody Mousy Brown is the embodiment of the tropical house perspective. Brown has a knack for twisting indie sounding EDM songs and adding the beachside party touch. But he can also stretch towards an almost ambient new age soundscape, as on “Glass Strings”. He can use organic Island sounding instrumentation, as on “Sunset Avenue”. Or he can slip into almost midi sounding retro sonics, like he does “Liquid Blue”, which is also infused with a soothing vocal melody.

In truth Mousy Brown just has a keen ear for new sounds of all EDM tropes, and puts out a steady stream of gorgeously original tracks. Mousy’s tunes are overpoweringly likable, and this specific quality is one of the best parts of this set. How can you not fall for the melody in “Estrella”, or the thumping bass lines and acidy jazz vocals on “You Are Too Good”?

How can you resist the seduction of the piano driven “Summer Daze”, or the intense introspection of “Strawberry Blue”? How can you ignore the playing off-kilter rhythms and sounds on “Ultraviolet”?  All-round, Mousy Brown’s instrumental choices are excellent, mixing his tunes with some surprising twists on the genre.

From track one, “Head Highs & Electronic Vibes” grows with a build that envelopes your body within a shroud of bass and the combination of Mousy Brown’s elegant instrumentals and some unique vocal melodies which adds a warm soulful aura to the ever evolving songs.

There is enough creativity put into this album without making the songs too much to handle, and this is something that makes Mousy Brown such a distinct artist. He definitely has a lot of talent and something that really makes him stand out is how he puts a different spin on every song. There are even a couple of tunes that are even willing to step beyond the EDM boundaries if he wanted them to.

In short, the album “Head Highs & Electronic Vibes” has an abundance of rhythmic and melodic ideas layered over each other. With this recording, Mousy Brown has clearly lived up to the high expectations, delivering a refreshingly diverse album by combining his tropical sounds with a whole lot of other influences. The fact that most of the songs are around the 3 minute mark also shows that Mousy Brown allows no filler through, cutting out all excess.

King Cavalli: “4am” – honesty for all to behold!