Influenced by artists like KRS One, Jay-Z, Stack Bundles and more, Prince Black is a true student of the game. In an era when music is more accessible than...

Influenced by artists like KRS One, Jay-Z, Stack Bundles and more, Prince Black is a true student of the game. In an era when music is more accessible than ever and popular opinion unfolds in real time, the span in which an artist’s shine can dull has collapsed. Ten years ago, people might start asking questions after two or three bad releases; today, the wrong Instagram caption can bring a career to an end. Hence artists need to be sharp and focused with their craft on each release, to avoid stumbling further down among the masses who are trying to make their voices heard each day in highly competitive industry, and genre such as Hip-hop.

Instead of floundering about hoping the fans would somehow start to see it his way, Prince Black  does what he does best, pinning his ears back and hammering home the point that while his material is for public consumption, the criteria by which he judges his successes is a personal one, and not based on singular confrontations with peers. 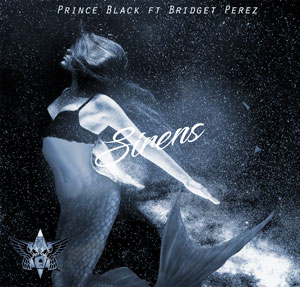 From the onset of his latest track, “Sirens” (ft. Bridget Perez), Prince Black is in his bag, rapping voraciously over a bass driven instrumental with an intense air of someone confronting his virtues with his vices.

The track consistently showcases Prince Black’s vocal versatility, and places a heavy focus on his strong pen game. There’s content that you can relate to, and content that you can truly feel on this cut. This is most certainly a song of substance. “Sirens” (ft. Bridget Perez) hints about trying to build yourself up despite the losses.

Recognizing your virtues and vices – taking on all of your trials and tribulations, and becoming stronger. What doesn’t kill you, just makes you stronger. If your addictions and afflictions don’t kill you first, of course! I wish I could go over every bar and verse, but you have to check it out for yourself, and attach your own personal meaning to Prince Black’s exclamations.

The track is executed in a melodically attractive way with Prince Black and Bridget Perez crooning the hooks in unison, as well as in a call and response manner. This adds a nice thick twist to Prince Black’s rhymed verses, and makes sure this track doesn’t get lost in the current hip-hop quagmire. He was really able to channel a lot into this track and it shows.

Indie Dance Label Audio arc Records is on the rise!