King in the Belly: “Magic Town” would rock in any era!

Brooding with a retro swagger, “Magic Town” by King in the Belly is like a bewitching stroll through the aisles of a vintage record shop, where the magic lies... 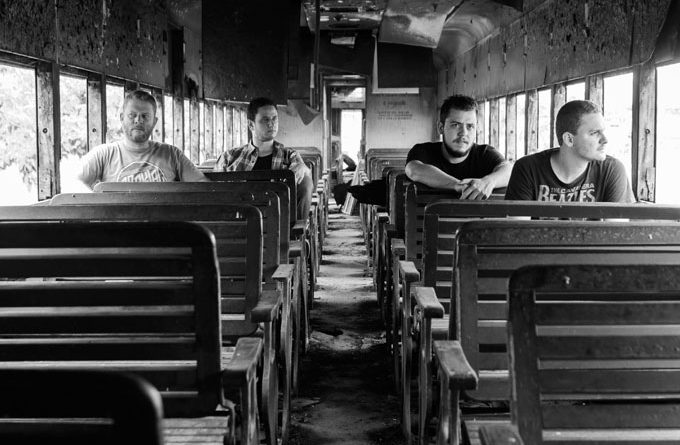 Brooding with a retro swagger, “Magic Town” by King in the Belly is like a bewitching stroll through the aisles of a vintage record shop, where the magic lies in the discovery. The song does have an almost mystical vibe, accented by the lyrics – telling the story of a bored guy in a small town finding ways to get his “high” – and the impressive guitar and drumming. The melody chugs along at a carefree pace, often changing direction, much like a spaced-out jam-fest of the sixties and seventies. This is psychedelic poetry from another era, and the perfect introduction to this band. Strung out on Jim Morrison-like vocals and abrasive guitar riffs, it slowly eases into a melodic, shout-out chorus.

Of course – King in the Belly’s lyrics are the aural gel that hold everything in place. The song is characterized by sharp inspired imagery and clever, tongue-in-cheek witticisms, but also maintains a worldly vulnerability. And that’s how they draw us in, with a theme and lyrics that resonate across the soundscape they create, and a character we may recognize in our small-town friends and maybe in ourselves. 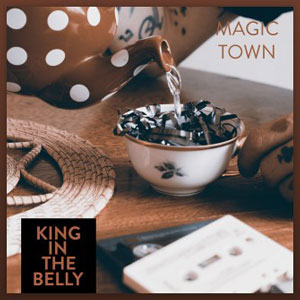 Plenty of alternative bands handicap themselves by trying to be the heaviest on the planet. King in the Belly’s genius is that they’re more interested in taut grooves and slithering melodies, underscored by thick guitar riffs that blend seduction and destruction.

King in the Belly has an almost defiant, contrarian streak running through them; a trait found in some legendary 90’s alternative bands, and almost completely lost in today’s corporate rock attitude. There’s a sideways swing in the way they loosen, then tighten the rhythm section grip; the lethal precision reigning throughout only insures that you’ll be in the exact proper position when the gnarled guitar solo knocks you to the floor.

Though there is been plenty of guitar fuzz about, the core four-piece band all have ample room to shine here. There’s no denying the passion in creation put towards “Magic Town” by King in the Belly, making the track come off as a timeless piece of music that would rock in any era.

King in the Belly is an Australian/Brazilian alternative rock band based in Brazil. The band consisting of “Ted” Bertoloni (lead vocals, guitar), Vinicius Boareto (drums), Diogo Silverio (guitar) and Luke Kiernan (bass), released its first single “Behind” in March 2017 and followed that up with another 3 singles during 2017.

The same year also saw the band touring regionally, and in Sâo Paulo, the largest city in the country. King in the Belly who cites a wide range of musical influences ranging from Australian rock to Alabama Shakes, also played a standout gig at the first Brazilian Google House during the SXSW-inspired HackTown Festival. The band’s debut album is set to be released in early 2018.

Fame: “With Me” entwines uplifting introspection and party storytelling!