That Connecticut rapper and singer, Klokwize, is a funk aficionado, is glaringly clear on his brand new album “Permission To Land”. He spent two years in LA recording with his...

That Connecticut rapper and singer, Klokwize, is a funk aficionado, is glaringly clear on his brand new album “Permission To Land”. He spent two years in LA recording with his hip-hop heroes, like legendary producer DJ Quik (on ‘A Little Respect’), Bruno Mars ’24K Magic’ producer Uncle Dave Foreman  (on single ‘Alarms’ and more), Rae Sremmurd producer Resource Davinci (on ‘King of Moving On’) and fellow CT native Ant Quint (on ‘Sunshine’ and more).  Klokwize also called in west coast features such as Suga Free, Shy Carter, Jp Cali Smoov and 2pac hook-smith Bo-Roc to make sure the groove was just right.

The album dispenses with the year’s list of clichéd urban albums as well as most of the sound and subject matter of his nearest fellow hip-hop acts, but this isn’t to say its conventions are unconventional. It doesn’t sound like much else out currently, but it sounds a lot like classic funk. Yet though it is a studious funk experiment, the obviousness of its reference points doesn’t take away from the sharpness of the playing or the cleverness of the writing.

Part of the genius of some of the legendary seventies funkateers is that they often wrote on two levels. You got searingly direct words for life on some songs, but there were also times they’d stash social commentary inside seemingly upbeat songs. Klokwize strikes a similar balance between veiled and overt lyrical outreach. The easy pliability of the accompaniment here suggests his team of producers and players have been put to their best use making grooves for the man to rap over.

The tight upbeat grooves and heartwarming soul that runs through these songs feels like the result of Klokwize and his collaborators having fun making great music, not simply designing pop-radio nuggets as battering rams to storm mainstream hip-hop’s gates. Although that’s what these songs could so easily achieve. Beneath the hood of any smooth ride, though, is always an engine working harder than it lets on. And Klokwize gets about setting this thing on fire from the opening track, “Alarms”, which forges a gorgeous retro groove and an old school rhyme scheme that takes us back to the eighties.

There can be no doubt that “A Little Respect” ( ft. Suga Free, Bo-Roc & Jp Cali Smoov) is crafted to be one of the album’s centerpieces as it struts and stomps, ready to beat the listener into submission. This is a bold, striking, sprawling rush of guitars and bright splashes of rhythmic color, all the better for Klokwize to conjure up some high-level rapping against the backdrop of soulful chants and harmonies. 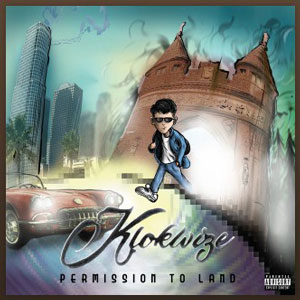 This winning formula is repeated on “Say Goodbye” (ft. Shy Carter) with the same captivating results. That combination of bottled hip-hop passion and funk efficiency spreads itself evenly throughout the 11-track set.

The bass-riding “Sunshine” finds Klokwize slickly mixing up his phrasing, moving from vocal wooing to intimate rapping. “Clearest Blue” comes out of nowhere with its electronic soundscape toned directly for dance floors. Whatever you think of his skills as a rapper or songwriter, Klokwize is a compelling presence with a streak of eclectic creativity.

All should agree that his emotional vocal performances on the earworms, “Breeze Back”, “King Of Moving On”, and “Ships In The Night” prove fascinating. The songs on the first half of this album captures a sort of recurring echo, the feeling that history, tradition, and the performance of those traditions are essential to preserve a genre. And in the case of “Permission To Land”, at least two genres!

In the second half of the album the artist showcases his skillset with modern pop, EDM and R&B flavors. If Klokwize can continue to fuse his drive for genuine emotion and the power of reality with his wit and inventive mind for words, an even greater accomplishment may lie ahead. And that’s a very tall order, considering the level of quality this album contains.

Artdayn: “The Fall” is way ahead of the curve!