Renowned jazz website Jazzgroupiez recently dropped the EP “Millinaissance” to critical acclaim and general fan excitement. The project led by Todd Moultrie has been dedicated to the existence and...

Renowned jazz website Jazzgroupiez recently dropped the EP “Millinaissance” to critical acclaim and general fan excitement. The project led by Todd Moultrie has been dedicated to the existence and prosperity of jazz music since its launch in 2013.  Moultrie’s passion for the genre had been ignited by his parents, who reminded him how records like, Coltrane’s “Love Supreme,” Monk’s “Round Midnight”, and others had such a profound impact on his dad’s life. Hence Moultrie and his siblings would rummage through his late dad’s vinyl collection almost every weekend. Jazzgroupiez started out assisting upcoming jazz acts in establishing themselves, followed by Todd Moultrie travelling around the country to meet some jazz acts such as Robert Glasper, Milton Suggs, Gregory Porter and few others. The experience picked up along the way has resulted in “Millinaissance”, the project’s first major work.

The 4-track EP blends a smattering of flavors ranging from bebop to smooth and modern jazz, with just a drop of New Orleans, a pinch of Chicago and a smattering of New York. “Millinaissance” avoids aesthetic purities or genre constraints, moving instead through a potpourri of eclectic sounds that at times reverberate with organic warmth, and at others seem to bounce to the rumination of finely spliced sampling. An unlimited number of possibilities rest within the genre’s framework, and this recording, though concise and to the point offers proof of that fact. 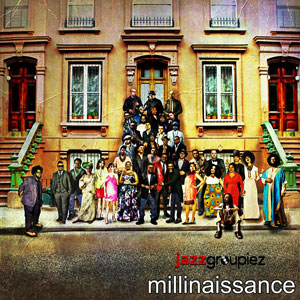 Four tracks of various vintage, background and taste rotate on and off the bench here, in an engaging program that moves from stride to outside without a hitch. Every cut on the recording makes a firm impression, but the ‘best of the bunch’ award ends up going to “U”, for the thoroughly engaging, outside-the-box explorations.

The charged beat driven arrangement accentuates its urban musical identity, honoring the genre’s creative spirit. “NOCHINY” (feat. JazzAnarcy) on the other hand, leaves space for the saxophone’s intelligently audacious statements to shine through.

If you’re looking for a smooth easygoing groove, then “So Cal” will put you in the mood. Delicate on the ear, and comfortable for the soul, the guitar noodling and finger-snapping rhythm is just enough to put a gentle swing into your sway. The track is mellower than what’s come before, but on the same high instrumental level as everything else.

“St Louis” leans on a repetitive keyboard motif to hook your attention, and is a perfect lesson in the merging of diverse cultural sounds with eclectic effects integrating into one cohesive piece of music. The voluminous textures are a thing of beauty here.

This EP defines another point on the timeline of the post- or neo-bop movement in jazz, a resurgence in the form that has its roots in the new millennium. “Millinaissance” stands on its own in terms of compositional narrative, improvisational extent, and sheer creative passion. The songs are not only melodic, but the choice of instrumental variety is just perfect.

The saxophone, the guitar, the drumming… even someone who normally doesn’t like or understand jazz will find themselves easily falling in love with this. The songs always go somewhere, but never wander far away from the original theme, or overstay their welcome. No doubt an ideal approach by the Jazzgroupiez to capture and hold your attention.

Raw Webb: “B-Boy Stance” does it with style!