Savannah Philyaw is a young singer, songwriter, and performer from San Diego who writes a blend of acoustic-pop, folk, Americana, and country style songs. Her track, “Can’t Avoid A...

Savannah Philyaw is a young singer, songwriter, and performer from San Diego who writes a blend of acoustic-pop, folk, Americana, and country style songs. Her track, “Can’t Avoid A Dream”, produced by Joel Piper, captures the desire of following the dream in our hearts and living out our passions. “Songwriting is my release, my passion, and my best friend. It has allowed me to be honest and open without fearing judgement, say Savannah. “My mission is to create music that inspires others in the way that other music inspires me. I like to write about happy things and those experiences that can make us all smile no matter what time of day. Music is not what I do, it’s who I am.”

Listening to “Can’t Avoid A Dream“, it’s her voice that strikes you at first. It’s a clear voice, an honest voice, a strong voice. A voice that’s compelling whether you like her kind of music or not. I’ve reviewed her before, and I’ve not heard her sing anything that I’ve not found to be at least ‘very, very nice’. 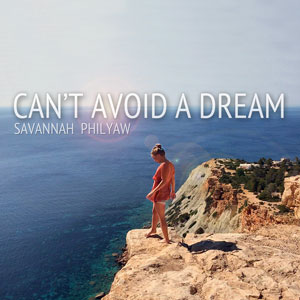 Savannah Philyaw has a great voice. That’s all there is to it. So if it’s never her voice that ever wavers, if there is any variable,  it can only be in the quality of the material she’s performing, and since her music has steadily increased in quality, we already know what the result of listening to this single is.

Savannah’s voice is entirely shorn of studio trickery. There’s just a hint of reverb, a technique which makes her voice sound ever more luxuriant on this track. On “Can’t Avoid A Dream” she uses the hallmarks of her classic songwriting style — the economy of the language, the simple clear-cut arrangement, the forays into deeper personal introspection — to articulate a wholly refreshing perspective on matters of life and  love that have become archetypes.

It isn’t just that she proves to get the genre better than just about anyone claiming to record either mainstream or alt folk-Americana music today, it’s that she does something legitimately interesting and progressive with that knowledge.

That she’s possessed of a voice that melds unerring control and sense of pitch with emotional fire and peerless phrasing is, in a way, incidental to what she does with that voice, despite the fact that so much of what I’ve written about Savannah Philyaw focuses disproportionately on her vocals, when in fact she just as great a songwriter.

And one of her most distinctive gifts as a songwriter is her ability to use unforced, natural language to capture a vivid image that becomes the focal point for a song, in this case “Can’t Avoid A Dream”, which, while grounded in realism, leaves plenty of interpretive room.

RAVENSCROFT – “STAND UP” is Bone-crushing!