LucidFer is a Croatian band that blends pop and rock with elements with grunge, bluesy guitar solos and melodic vocals. The band spent 18 months completing their debut album... LucidFer is a Croatian band that blends pop and rock with elements with grunge, bluesy guitar solos and melodic vocals. The band spent 18 months completing their debut album “Vol.1” which is breleased through the independent Croatian label Olde Scratch Records. LucidFer consists of Aleksandar Vrhovec (Guitars, Piano) who composes the music, Bojan Aleksic (Vocals) who writes the lyrics, Giò Maucieri (Drums) and Yaroslav Kiyashko (Bass). The album was mixed by Filip Lacković and mastered by Nathan Reiner, while Aleksandar Vrhovec took care of the artwork. The slurring sludge of this album sounds as vibrant and innovative today as when grunge songs dominated radio waves more than a quarter of lifetime ago. That’s also because LucidFer has infused their sound with plenty of other interesting elements. The band’s technical abilities are great, too; each member contributes almost equally to the power of the experience musically, and they react to any quick changes in the songs very efficiently and effectively. Of course, the highest praise still has to go out to vocalist Aleksic and guitarist Vrhovec for creating such a melodic and deep atmosphere on the album.

In consequence, “Vol.1” expectedly seethes with layers of monstrous riffs and solos, churning rhythms, profound lyrics and superb vocals. Listening to the album really is a rollercoaster-like experience both musically and emotionally, meaning that, even within songs, you really never know where the band will take you next or how that sudden drop, turn, or twist will affect you. 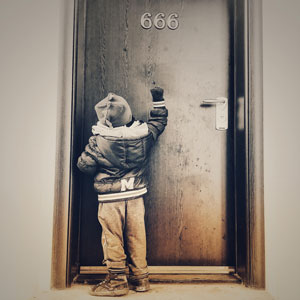 In the computer-aided world of music, does anyone out there still write a song or play a riff like Aleksandar Vrhovec? He has an uncanny ability to hit the listener on multiple levels. A track like “Trail” feels like soul bearing itself to the world, and yet the sound is so bright and bold at times.

When this record is really working, that’s how it strikes the ear: juxtaposed sounds of absolute emotion and utter beauty. Many tracks warrant repeated listens before they can be fully appreciated. There’s just a lot going on.

The production value is also what I really enjoyed about this record, because it just seems that the guitars on this album are so much beefier and hold a clearer tone than the recorded guitars from many recent albums in the rock arena. The hard-hitting crunch of “Wrong Side” is one of the tracks that emphasizes this theory. As does the epic closing track “No Faith” which travels through a gamut of rich and rewarding tones.

But in between the opening and closing track there is a wealth varied sounds and emotions to experience. Not least the album’s lead single, “Island in the Sun”. Bojan Aleksic’s melodic voice adds lushness and depth to the more delicate, clean guitar approach from LucidFer. You don’t have to be a rock head to enjoy this one.

And if you’re into great voices and alluring harmony, then don’t miss “Seventh Seal”, which forges all the melodic beauty this band is capable of. A part from the singing and lead guitar, the slow-burning “Lonely” showcases the deep resonant tone of Yaroslav Kiyashko’s rumbling bass guitar which steadfastly drives this song forward.

Kiyashko’s playing also shines on “I Rode with Death”, alongside the unusual guitar and piano accompaniment which requires a keen ear. But this also presents timekeeper Giò Maucieri and occasion to displays his tasteful chops, which he consistently repeats on “No Faith”.

But there isn’t a bad song or performance on the album and LucidFer show that they have the flexibility to switch between radio-ready rock, acoustic and heavy rock with ease. I have to say that “Vol.1” far exceeded what I had expected. The songwriting is sharp and the vocals and playing are superb. I can’t pick one favorite song but “Wrong Side” is up there pretty high on the list.  The album will be released on Vinyl during May 2018, and will be available on the band’s Bandcamp page for purchase.