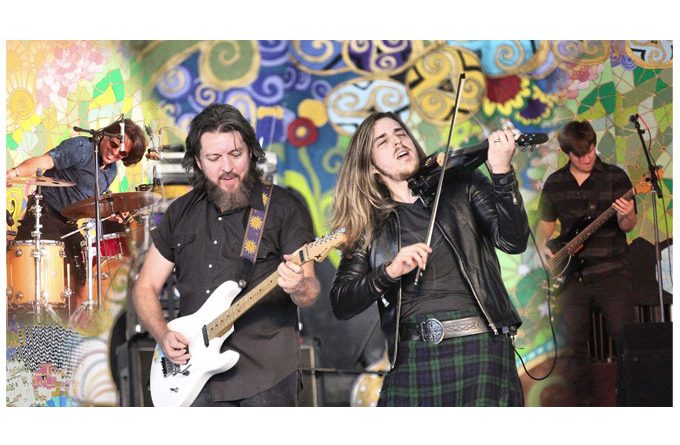 Mixing monstrous guitar riffs, heavy rock rhythms and Irish fiddle melodies with Scottish bagpipe tunes will bring you a blend of hard hitting American beats and melodic Celtic rock. This peculiar musical palette is delivered by renowned fiddler Dylan Cleghorn and his father, the master Texas guitarist John Cleghorn. Together they make up the crackerjack collective known as CLEGHORN, whose performances have enamored audiences and stirred up festivals across North America. Dylan and John have been acclaimed as charismatic performers who even go as far as leaving the stage to play among the crowd during their concerts. What they bring to the music scene in general and the Celtic Rock scene in particular is an authenticity, an intelligence and a whole lot of class. That ‘class’ is evident throughout all the tracks on their latest album, “Celtic America”. It shows how well the band works as a unit, complimenting each other. I suppose many years of performing together is going to give us that polished sound.

The album kicks off with the title track, “Celtic America”, setting a jaunty pace that is kept up throughout. Overdriven guitars drive the rhythm while the fiddle adds that special twist. It shows the band’s knack for writing punchy and catchy songs to go along with their ballads and anthem like offerings. “What If I” starts slowly with some lovely guitar riffs accompanying Dylan’s opening lines, but it soon turns into an almost hypnotic heavy beat. The song also features some smooth melodic bridges to match the pounding rhythms. 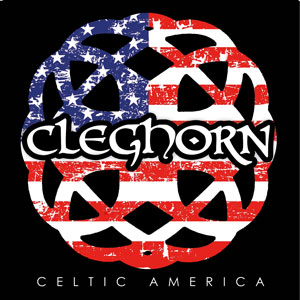 Like many of the band’s best songs “Dance Like We’re in Love” is overflowing with energy as all the instruments are in full force and blend together seamlessly. Due to the impressive musicianship, even the bass can be clearly heard and it enhances the song.

This has a distinctive alt-rock flavor and could easily make its way onto mainstream radio with its catchy chorus. After the instrumental “Mr. Mulligan”, CLEGHORN give us another dose of sweet adrenalin with the gorgeously melodic “So in Love”. The lead voice sounds as good as ever and dishes out some of the most impressive melodic vocals on the entire album here.

There’s a good deal of variety on this twelve-track venture. It’s completely packed with rock influences and some soothing ballads. As the album progresses, the euphoria is gradually enhanced by the sprawling melodies and energetic jig-like fiddle interludes by Dylan Cleghorn.

Not far behind though, to keep things rocking, John Cleghorn maintains his axe on fire all the way, dropping a series of riffs and solos. Things get mellow and sentimental on “I Will Remember You”, before all hell breaks loose on the blues infected rocker, “Celtic Women”. Giving us the measure of how able CLEGHORN are in switching tone and tempo with ease.

For me, there is no bad CLEGHORN song on this album, just songs that I like more than others. The wistful “The Island of Katy and Abbey” are one of these, as is the thundering “The Shore of Muldoon”. “Whiskey in the Jar” is one of the best representations of the CLEGHORN sound, as it holds an even mix of all their signature and thematic elements, It builds upon itself with each instrument coming in between a rallying, chant-heavy chorus instilling a message of optimism, giving me goosebumps in the process. The album closes with the beautifully poignant orchestrations of “Erin Go Bragh”.

Put simply, “Celtic America” is another step forward in the band’s evolution – with plenty of rock aggression as well as powerful Celtic rhythmic and melodic elements, CLEGHORN have also placed a great deal of emphasis on their songwriting and lyricism. Moreover there’s a strong sense of musicianship and passion that goes into their music, which renders it so captivating.

Room 1985 – Sonically, lyrically and vocally, more than lives up to its hype!